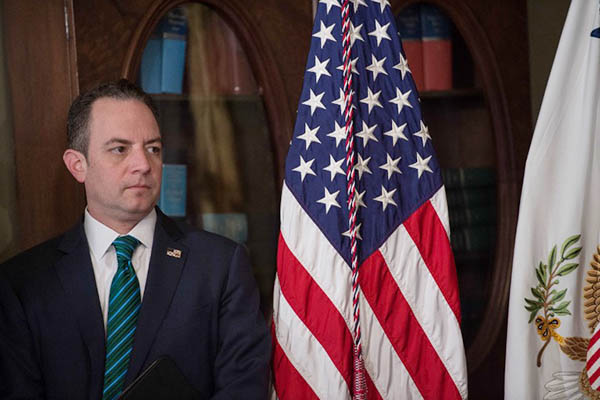 Chief of Staff says there is no truth to rumors that president is insisting Steve Bannon play major role in National Security Council.

A top aide denied on Sunday that President Donald Trump is having difficulty filling the key post of national security adviser because of White House moves to politicize the office.

Trump, at his Mar-a-Lago getaway in Florida, was set to interview four candidates to replace Mike Flynn, the retired general who was ousted as national security adviser for deceiving Vice President Mike Pence about his contacts with Russia’s ambassador to Washington. Meanwhile, White House chief of staff Reince Priebus hit the Sunday television talk shows to push back at reports of disarray at the National Security Council, the president’s main forum for decision-making about issues of national security and foreign affairs.

On Fox News Sunday, he was asked whether Trump was insisting that his controversial chief political strategist Steve Bannon play a major role in the NSC, reportedly a source of concern to candidates for the national security adviser position. “The answer to that is no,” Priebus said.

Another leading candidate, retired general and former CIA chief David Petraeus, is no longer in the running.

The president told reporters on Saturday that he would make a decision over his new national security adviser “over the next couple of days.”

Retired General Jim Jones, who served as national security adviser under former president Barack Obama, said the post requires a strategic thinker who enjoys direct access to the president and the confidence of key cabinet members. “That relationship [with the president] has got to be a very strong and very direct,” Jones said on CNN’s State of the Union.

Robert Harward, a retired vice admiral and former Navy SEAL, turned down Trump’s offer of the national security adviser job earlier in the week, citing financial and family reasons. Media reports said he was concerned he wouldn’t be able to bring in his own team to staff the NSC. Other reports said he was put off by apparent chaos in the White House.

Priebus said the staffing issue was never raised in the talks with Harward. “The president has said very clearly that the new [national security adviser] will have total and complete say over the makeup of the NSC and all of the components of the NSC, and there is no demand made by President Trump on any candidate,” he said.

Set to appear on ABC’s Sunday talk show This Week, Harward dropped out at the last minute. With the National Security Council reeling from Flynn’s ouster, the White House delivered another shock on Friday when it abruptly dismissed the senior director for Western Hemisphere affairs, Craig Deare, for criticizing Trump and his top aides, Politico reported.

However, Priebus told Fox News Sunday any implication that the White House wants the national security council under the control of political operatives is “fake news.” He also dismissed a New York Times report this week that members of the Trump campaign had repeated contacts with Russian operatives during the campaign as “garbage.”

“The top levels of the intelligence community have assured me that that story is not only inaccurate, but it is grossly overstated,” he said, declining to say who had given those assurances.