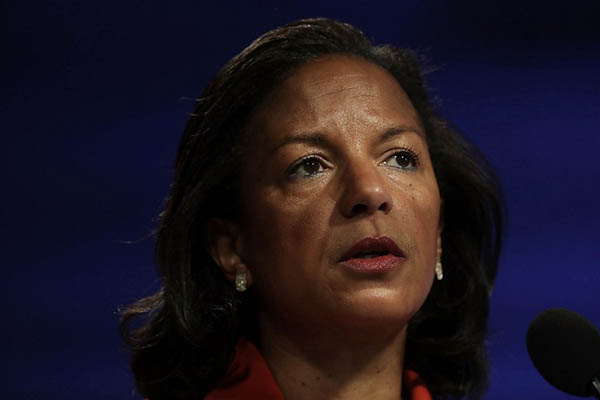 The United States can be relied upon to uphold mutual defense treaties with its allies but a trans-Pacific trade deal now looks unlikely, National Security Adviser Susan Rice said on Monday.

In her first public comments since Donald Trump’s surprise election win, President Barack Obama’s top foreign policy adviser told AFP the weight of the presidency would likely temper Trump’s stance. On the campaign trail, Trump suggested some of America’s treaty allies are not pulling their weight and that Washington may not feel bound to defend them, triggering concern in capitals that have relied on U.S. protection for decades.

But, in an exclusive AFP interview conducted nine weeks before Trump takes charge, Rice sought to play down concerns. “It is manifestly in the United States’ interests for these alliances to endure and to be a source of confidence to our partners and for them to understand that they don’t need to come from under the U.S. umbrella,” she said.

While stressing that she did not want to speak for or speculate about Trump’s foreign policy, she sought to reassure key U.S. allies in NATO and the Pacific Rim that they would not be abandoned. “The weight of this office, and the weight of American global leadership, and the responsibilities that it entails, and the history that we share, the interests that endure, make it reasonable for our allies and partners to expect that the United States will uphold its obligations,” she said.

During the campaign, Trump at one point suggested—only to later backtrack—that South Korea and Japan might want to build their own nuclear weapons to deter the North Korean threat, raising the specter of an Asian arms race. The victorious Republican also repeatedly criticized those European powers accused of not spending enough on NATO’s collective defense, rattling the allies on the Alliance’s eastern flank concerned about Russian adventurism.

Rice said Obama had reached out to Asian capitals ahead of this week’s summit of Asia-Pacific leaders in Peru to reassure them that America still sees its alliances as crucial. Washington has also sought to bind southeast Asian powers into its orbit, and ensure stability and prosperity in the region, by promoting the Trans-Pacific Partnership, a free trade deal to counter-balance China’s economic might.

Rice acknowledged what became obvious during the campaign: that coming to an agreement on TPP would be difficult for the Obama administration before it leaves office.

Trump campaigned on a strongly protectionist platform, arguing that previous trade deals had been a disaster for American jobs. He decried TPP specifically as a “horrible deal.” Even his defeated opponent, Obama’s former secretary of state Hillary Clinton, said she opposed TPP.

But Rice warned that if, as seems likely, TPP is abandoned, it will leave space for China to expand its influence among traditional U.S. allies in southeast Asia. “TPP is obviously a challenge at this stage,” Rice said. “Trade is not going to stop, it will continue,” she added. “We’ll be part of it but we won’t be as able to shape the framework to serve our values and our interests,” she said. “That leaves a vacuum for countries like China and others to fill that is not in our interest.”