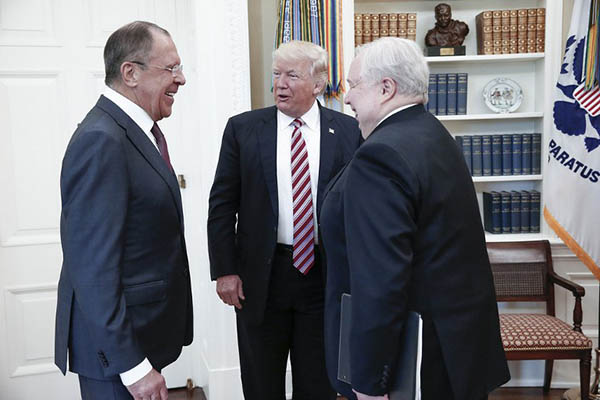 Donald Trump’s administration was left red-faced on Thursday after the Moscow surprised it by releasing pictures of a closed-door meeting between the U.S. president and Russia’s top diplomat.

The images—issued by the Russian state news agency TASS, and subsequently published by much of the global media—showed a grinning Trump shaking hands with Sergei Lavrov and the Russian ambassador in Washington, Sergei Kislyak, during an Oval Office meeting. That Wednesday meeting was already being seen as a major diplomatic coup for the Kremlin, a red carpet welcome just months after being hit with U.S. sanctions for meddling in the 2016 presidential election.

Veteran diplomats questioned why Trump agreed to host the diplomats—a rare honor for non-heads of state, much less for those at the center of major U.S. political scandal. U.S. administrations often treat Oval Office meetings as a type of currency, dangling the prospect of a high-profile sit-down to gain leverage or concessions in negotiations. But the emergence of photos compounded the perception that Russia had won a diplomatic victory and that the Trump White House was outmaneuvered.

Publicly, the White House put on a brave face. Trump “should be meeting with the foreign minister,” said White House spokeswoman Sarah Huckabee Sanders, lambasting critics. “For them to try to attack him for doing his job, maybe they should spend a little more time doing their jobs and we wouldn’t have all the problems that we do.”

Privately though White House officials seethed at what they described as a breach of trust. Officials said that Vladimir Putin had requested the meeting, a quid-pro-quo for his recent face-to-face with Secretary of State Rex Tillerson in Moscow. The White House was told an official Russian photographer would be present, implying the images would be for the historical record and not necessarily made public.

Two officials admitted they were not told that the images would be made public. Asked whether the Russian delegation informed the White House that they planned to release the photos, one official said tersely: “No they did not.”

Russian foreign ministry spokeswoman Maria Zakharova, writing on Facebook, countered: “The American side did not ask us to refrain from publishing these photographs.”

The photographer involved—Alexandr Scherbak—also took to Facebook to address what he called the “hysteria around my photoshoot,” which raised hackles among U.S. media denied access to the meeting. “There was nothing unusual about the photoshoot,” he said, adding that the images were taken as part of a regular collaborative deal between his employer, TASS, and the Russian foreign ministry. “I was scanned, patted down, and then sniffed by canines,” he said. “We worked for just a minute and that’s all.”

Former U.S. intelligence officials have suggested allowing a Russian photographer access to the Oval Office could pose a potential cyber-security risk, and the director of the National Security Agency, Admiral Mike Rogers, was grilled on the subject by the Senate Intelligence Committee Thursday. Rogers told the hearing he had not been consulted beforehand.

The Oval Office pictures could hardly have come at a worse time for Trump, deepening suspicions that he is too cozy with Putin’s government. His campaign faces a slew of investigations about whether it colluded with the Kremlin to derail Hillary Clinton’s presidential bid.

The Lavrov meeting came just hours after Trump fired his FBI director James Comey, the man responsible for investigating the allegations of collusion between his team and Russia. The embarrassment was compounded by Ambassador Kislyak’s presence. He is at the center of a series of questions about contacts between Trump’s inner circle and the Russian government.

Michael Flynn’s failure to disclose meetings with Kislyak eventually led to his departure as national security adviser and made the Russian diplomat a virtual household name. “I could have done without the attention,” Kislyak told AFP recently. The White House later released its own pictures from the meeting, which did not feature Kislyak.