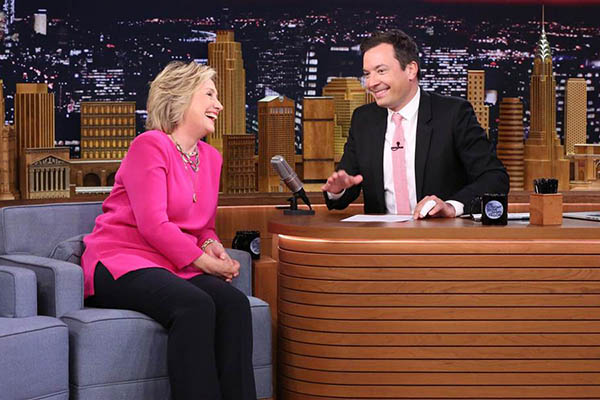 From Jeb Bush to Hillary Clinton, the presidential race is playing out on late-night TV.

Late-night talk shows, which are taped in the evening and broadcast just before midnight, are an institution in American television. Traditional viewing audiences have waned, but are still in the millions—not too shabby for a presidential candidate looking to boost his or her profile before the primaries.

In the past 10 days, the parade of White House contenders from both parties who have appeared with the nation’s kings of late-night comedy has been non-stop. Viewers have seen Jeb Bush, whose Republican campaign is sputtering; Vice President Joe Biden, who cannot quite decide whether to run; Donald Trump, the billionaire Republican frontrunner, and Hillary Clinton, the Democratic frontrunner who is slipping in the polls.

The atmosphere is friendly and encourages humor, and the hosts generally tend to make a candidate look good. As public appearances go, it is pretty low-risk.

On Wednesday night, after Republican candidates did battle in their second debate, Clinton appeared on The Tonight Show with Jimmy Fallon, who dressed as Trump in one skit—a bit he unfurled with the real estate mogul himself a few nights before.

Candidates can poke fun at themselves—Clinton quipped about the email scandal that has dogged her for months—and try to show a side of themselves that voters might not otherwise know about.

“It’s a way to humanize a candidate,” said Robert Thompson, a professor of television and popular culture at Syracuse University in New York state. “You don’t have to be a stand-up, you don’t have to be telling a joke a minute. But you do have to be likable,” Thompson said. “That old-fashioned broadcast, the five-nights-a-week late-night show, has got a structure that seems almost indestructible,” he added.

Cashing in on novelty, last week’s debut of The Late Show with Stephen Colbert—he replaced the legendary David Letterman—featured Bush. It drew a good response: 6.6 million people watched. But viewing habits are evolving. Fewer and fewer people watch the entire shows when they are aired, and fewer and fewer watch on an actual television.

Social media has changed the late-night game. Thanks to the star quality of the current crop of hosts including Fallon, Colbert and Jimmy Kimmel, viewers don’t have to stay up past midnight to catch the candidates.

“Just about everything now gets a second life in social media, but these shows in particular,” said Robert Lichter, a professor of communications at George Mason University. “You can fall asleep in front the TV while the show is on and yet hear all the great lines the next day on Twitter or Facebook.”

Of course, politicians have appeared on late-night shows before, but the trend is catching fire. In 1959, candidate John F. Kennedy appeared on The Tonight Show with Jack Paar. Later, hopefuls Richard Nixon and Ronald Reagan would follow suit.

Candidate Bill Clinton, a jazz buff and saxophone player, scored big points in 1992 when he appeared on The Arsenio Hall Show and performed “Heartbreak Hotel.”

In 2007, Republican Senator John McCain chose the Letterman show to announce he was running for president, breaking with a tradition of more formal settings to make such big announcements. In March 2009, Barack Obama became the first sitting president to appear on a late-night talk show. He has since appeared multiple times—memorably “slow-jamming” the news with Fallon—and always seemed to enjoy himself.

“Obama showed that going to these shows could be part of the presidency, not just part of presidential politics,” said Lichter, predicting that Obama’s successors will do the same.

Clinton’s appearance with Fallon could help her shed the image of a cold, calculating politician who comes across as not too sincere. “She is the sort of person who probably can be helped a great deal by this setting,” said Lichter. “She is right now working very hard at not looking like she is working very hard” at solving her PR problem, he said.

So what does the White House think of the rush for late-night limelight by the people hoping to take over for Obama, who cannot seek another term? Asked about Biden’s appearance with Colbert, Josh Earnest, a spokesman for Obama—the president for now is staying out of it all—said: “I did not see it. It aired past my bedtime.”