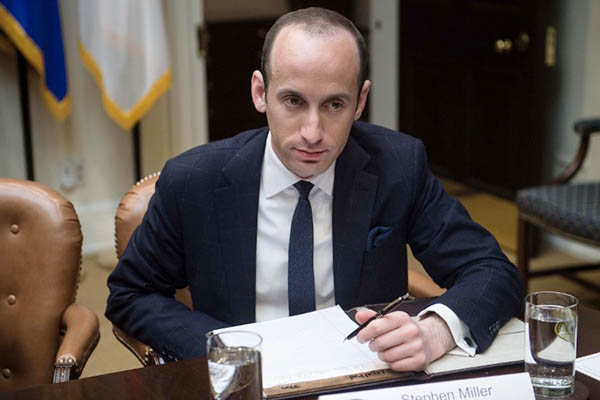 U.S. President Donald Trump was expected to unveil new measures on immigration as early as Monday in the name of keeping Americans safe, with a top aide insisting he did not overstep his authority with his controversial travel ban.

The White House could either file an emergency appeal to the Supreme Court, defend the merits of the order in lower courts or issue a new executive order. The last option was floated by Trump himself on Friday. “We are contemplating new and additional actions to ensure that immigration is not a vehicle for admitting people into our country that are hostile to its nation and its values,” Miller said on NBC’s Meet the Press. “There’s no such thing as judicial supremacy. What the judges did is take power away that belongs squarely in the hands of the president of the United States.”

The issue is sure to come up when Trump meets Monday with Canadian Prime Minister Justin Trudeau, who said after the Republican leader issued his ban that America’s northern neighbor welcomes with open arms “those fleeing persecution, terror and war.”

While the fate of Trump’s restrictions on refugees and travelers from seven Muslim-majority countries plays out in the courts, a separate executive order prioritizing the deportation of undocumented migrants paved the way for the arrest of hundreds of people, many of them Latinos, this past week.

As thousands of Mexicans protested on Sunday against Trump’s vow to make the country pay for his “big, beautiful border wall,” the White House confirmed the president’s plans to weigh new action to speed up deportations of illegal immigrants. “As a result of the president’s order, greatly expanded and more vigorous immigration enforcement activities are taking place,” Miller said of the deportation decree.

Earlier, Trump tweeted: “The crackdown on illegal criminals is merely the keeping of my campaign promise. Gang members, drug dealers & others are being removed!”

Over the past week, the federal Immigration and Customs Enforcement agency rounded up undocumented individuals living in Atlanta, Austin, Chicago, Los Angeles, New York and other cities in what it called “routine” operations.

But Miller indicated on Sunday that the raids were made more robust under Trump’s Jan. 25 executive order prioritizing deportation of undocumented individuals convicted of or “charged with any criminal offense,” including misdemeanors.

“It is true that Operation Cross Check is something that happens every year. But this year we have taken new and greater steps to remove criminal aliens from our communities,” Miller said.

The large-scale raids began in 2011 under then president Barack Obama. Many Democrats have called on the government to act in moderation, fearful that people without a criminal record will find themselves swept up.

The case of a mother in Phoenix, Arizona who was expelled to Mexico on Thursday crystallized such worries, even among some Republicans. “There is a lot of worry here in Arizona by those who… are illegally here but they have not committed aggravated felonies,” said Arizona Republican Senator Jeff Flake, adding that the only hope for permanent change lies in major Congressional reform.

Miller insisted in interviews on Sunday that the president has the power to keep some people from entering the country. The order that Trump issued abruptly in late January aimed to halt resettlement of all refugees for 120 days and that of Syrian refugees indefinitely. It also barred for 90 days the entry of nationals from seven predominantly Muslim countries. The ban was supposed to be in place while the government comes up with a new system of so-called “extreme vetting” of people seeking entry visas. This could include checks on their social media accounts, according to John Kelly, the secretary of homeland security.

But a federal judge in Seattle issued a stay against the order on Feb. 3. A three-judge appeals panel in San Francisco then voted unanimously against reinstating Trump’s ban.

The idea of the White House issuing a modified immigration order that would survive scrutiny in the courts does not convince Democrats, who from the outset have charged that Trump’s decree is simply anti-Muslim and plays into the hands of extremists. “It will be used as a recruitment [tool] for terrorist organizations. It will put Americans at greater risk traveling abroad,” said Democratic Senator Ben Cardin.