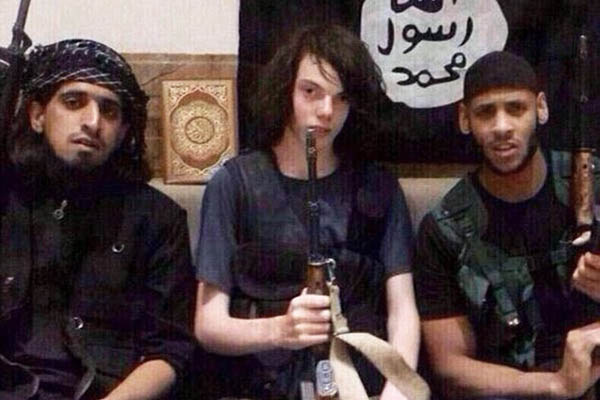 A westerner pictured alongside Islamic State group fighters and dubbed “Britain’s white jihadi” is in fact an Australian teenager who converted to Islam, a report said Monday.

A photo of the meek-looking youth, holding a rifle and sitting in between two jihadists with a black I.S. flag in the background, emerged on Twitter in late December. At the time the militant group, which has run rampant through swathes of Iraq and Syria, hailed his recruitment as “a major coup” with the British media dubbing him “Britain’s white jihadi.”

Doubts about the authenticity of the picture subsequently emerged after a blogger claimed he had fabricated the image to hoax the British press. But Australia’s Fairfax Media said the photograph had now been positively identified by friends of the teenager and members of two mosques in Melbourne. It identified him as a former high-achieving 18-year-old student called Jake, declining to reveal his full name at the request of a family member.

He was described as a math whiz who attended the Craigieburn Secondary College in Melbourne but dropped out in the middle of last year after converting to Islam and buying a one-way ticket to Istanbul en route to Iraq and Syria. His identification came after Australia stopped two teenage brothers at Sydney airport believed to be heading to the Middle East to fight, amid growing concern in Western countries over young people joining jihadist groups. That case followed three British schoolgirls leaving their London homes to join I.S. in Syria in February.

“He used to come here when we had a big lecture,” Abu Zaid, a committee member of the Hume Islamic Youth Center in Coolaroo, told Fairfax Media of Jake. “He was a very quiet guy, he stuck to himself. We weren’t close to him. I didn’t see any of the people [getting] close to him.”

The newspaper said the youth now goes by the Islamic names Abdur Raheem or Abu Abdullah. It said that two months after his disappearance, he contacted his family to tell them he was in Iraq training for a “martyrdom mission” with a suicide vest. He later called again to say he was “too scared to do it and he prefers being a soldier” and was planning to travel to Syria.

Around 140 Australians have traveled to fight with I.S. and other terrorist groups in Syria and Iraq, with another 150 supporting them at home, the government has said.

Prime Minister Tony Abbott said indoctrination was happening in unexpected places and that the government was dealing with the issue. “Too many Australians, it seems, are being brainwashed online by this death cult,” he said, referring to I.S. “Very importantly, we are about to begin a very big campaign to try to counter the influence that the death cult has, particularly online on vulnerable Australians.”

Abbott did not provide further details, but last month flagged changes to immigration laws to allow the government to revoke or suspend Australian citizenship for dual nationals implicated in terrorism. There are also plans for returning foreign fighters to be prosecuted or monitored under control orders, while Canberra has pledged a crackdown on organizations that incite religious or racial hatred.