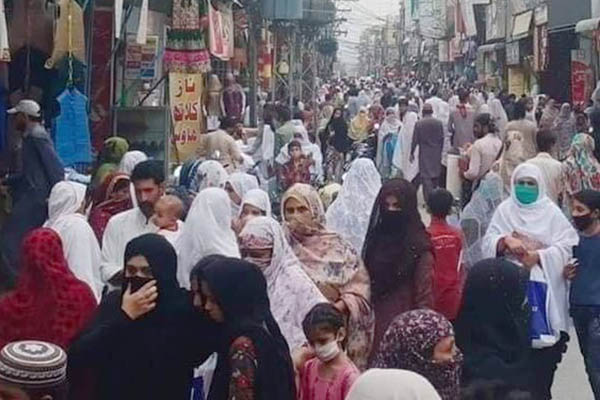 Crowds at a market in Peshawar following an easing of lockdown restrictions. Twitter

Small markets across Pakistan that have been allowed to reopen by the federal government provided they adopt preventative measures to curb the spread of COVID-19 were on Tuesday seen violating standard operating procedures (SOPs), prompting authorities to threaten to re-impose a “full lockdown” if the situation did not improve.

The federal government last week announced a “gradual” easing of lockdown restrictions from May 9, allowing small markets, retailers and most offices to resume operations, in addition to all industries linked to the construction sector. Prime Minister Imran Khan said this decision had been taken to “ease the miseries” of the masses, who were suffering from the economic impact of the sustained lockdown. Claiming that the coronavirus pandemic was now “under control” in Pakistan, he warned that if the situation worsened, the government could decide to re-impose a total lockdown.

On Tuesday, a mere three days since the lockdown was eased, the federal cabinet took notice of the nationwide violations to the government-issued SOPs, with Information Minister Shibli Faraz telling media that the prime minister had directed officials concerned to ensure strict implementation of SOPs to prevent a sharp spike in COVID-19 cases. “If there’s a massive surge, the country’s hospitals will not have the capacity to treat all patients,” he added.

Reiterating the prime minister’s comments, Faraz said the government had lifted the lockdown, as it could not afford to provide food to people at their homes because of limited resources and a prevailing economic crunch.

His words were echoed by Planning Minister Asad Umar, who told a launch ceremony of the Corona Relief Tiger Force that the government would have no choice but to re-impose complete lockdown if people failed to “act in a responsible and cautious manner.” He said that scenes of crowded markets appeared to suggest the threat from the virus was over. This could not be more wrong, he warned, adding that the threat could soon become even worse.

Since the easing of lockdown on Saturday, markets across Punjab—and especially in major urban centers—have all resumed operations, resulting in massive crowds that appear to care little for the SOPs issued by the government. The province has also allowed barbers and hair salons to resume operations, worrying medical professionals who believe this could also aid in spreading the virus.

In provincial capital Lahore, not only markets in Anarkali, Township, and Icchra, but also Gulberg and Liberty have witnessed massive traffic snarls, as people queue up outside shops for hours to purchase clothing or gifts ahead of Eidul Fitr. Despite the government demanding face masks for both customers and shopkeepers, the practice is being adopted only sporadically, raising fears that the virus can spread rapidly.

Similar scenes have been spotted in Rawalpindi and Gujranwala, with cramped, neighborhood markets the worst offenders, as they lack the necessary space to enforce any kind of social distancing measures.

Reacting to the spectacle, Punjab Industries and Trade Minister Mian Aslam Iqbal on Tuesday warned that the province would be force to re-impose a complete lockdown if traders continued to violate the SOPs. “We have opened the markets on the request of trader community but traders did not live up to our expectations,” he said, adding that people’s lives were being placed at risk.

In Sindh, shopkeepers in provincial capital Karachi were seen peddling their wares without any face masks, while shoppers thronged the markets without any concern for maintaining distance between them to curb the spread of coronavirus. Additionally, both foot and vehicular traffic have seen a significant jump, with shoes and other clothing items especially drawing crowds ahead of Eid-ul-Fitr.

Earlier, Karachi Commissioner Iftikhar Shallwani had said that strict action would be taken against any shop found to be violating any SOPs, including compulsory face masks and proper physical distancing.

Provincial spokesperson Liaquat Shahwani has repeatedly warned that if the traders violate SOPs, the government will have no choice but to re-impose a full lockdown. The province is currently pursuing a “smart lockdown” under which all shops have been allowed to reopen provided they follow SOPs.

On Tuesday, he said that while some markets saw people violating SOPs, there were others that had fully adhered to them. However, he told a private broadcaster, any worsening of the situation would immediately prompt pushback from the government, as it could not afford a massive spike in confirmed cases of the novel coronavirus.

“All shops and small markets will open from morning to evening for four days a week,” Khyber-Pakhtunkhwa spokesman Ajmal Khan Wazir told journalists last week. He urged the public to follow the provided SOPs to curb the spread of COVID-19.

However, scenes of massive crowding in markets in Peshawar and other parts of the province have been witnessed in the past two days, raising fears that the province with the highest fatality rate from the novel coronavirus could soon see another spike in infections.

Under the government provided guidelines, retailers would not allow entry to any customer without a face mask, and would ensure physical distancing of at least six feet between each person. “The shop owner will deal with only one customer at a time,” it states.

The government has also mandated retail shops remaining shut on Friday, Saturday and Sunday, though general stores, bakeries, pharmacies and vegetable shops are exempt from this.

Pakistan on Wednesday recorded 2,255 new infections of the novel coronavirus, its highest single-day spike in confirmed cases thus far, raising its national tally to 34,336. Nationwide, there have been 737 deaths and 8,812 recoveries, leaving 24,787 active cases