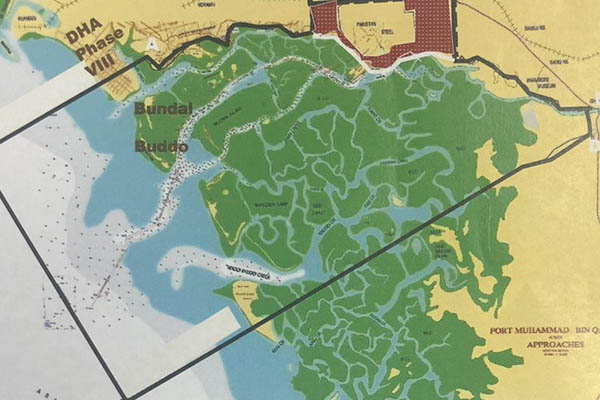 The Sindh government’s Land Utilization Department on Tuesday issued a memorandum rejecting a presidential ordinance that had granted ownership of the twin islands of Bundal and Buddo to the federal government.

“It is stated with vehemence that all islands along the coast of a province are the exclusive property of the respective provincial government, in the present case, the Government of Sindh,” it said, citing Article 172(2) of the Constitution.

Referring to an earlier notification that had granted the federal government the right to develop the islands subject to the “island being dealt with under law”; on terms and conditions agreed upon; and on the condition that any development also protected and promoted the legitimate interests of the local population, the Land Utilization Department said the federal government had failed to fulfill these requirements.

By unilaterally issuing the Pakistan Islands Development Authority Ordinance 2020, read the memorandum, “the ownership of Bundal and Buddo Islands was illegally usurped by the federal government, which is a clear and blatant violation of Article 172(2) of the Constitution.” It further claimed the “illegal annexation” was “also tantamount to changing the boundaries of our province, which is again a violation of Article 239(4).”

On Tuesday, Maritime Affairs Minister Ali Zaidi shared on social media a letter issued by the Sindh government, dated July 6, 2020, which had granted development rights for Bundal Island to the federal government. He claimed “no unconstitutional steps” had been taken, adding, “For the record, islands come under Port Qasim Authority coordinates.”

However, the document did not mention anything about rights of ownership, and the controversial ordinance appears to have been intended to fix this lacuna by granting ownership of the twin islands to the federal government.

Responding to Zaidi’s claims, Sindh Information Minister Nasir Hussain Shah questioned why the federal government needed to ask the provincial government’s permission to develop the islands if it owned them.

“Three questions from you … If this land was yours, then why did you ask us for NOC? Where is it written in our reply that we gave you the land? You are only allowed for constructions, for the benefit of the local people, which can be given to any private entity as well,” he posted on Twitter.