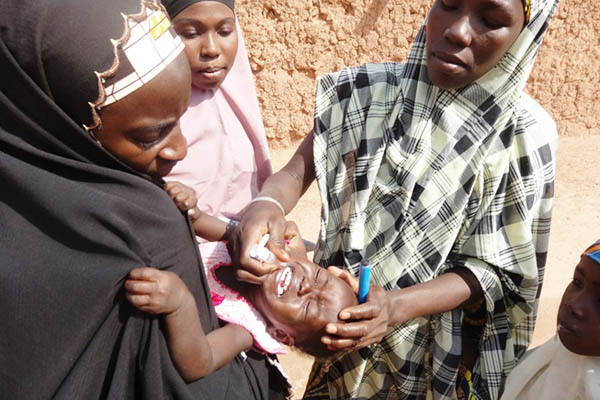 Afghanistan and Pakistan are the only two countries still on global list of countries at risk of polio transmission.

The World Health Organization on Friday took Nigeria off the list of polio-endemic countries, hailing a “historic achievement” more than a year after the last recorded case of the disease in Africa’s most populous nation.

The announcement, made in a statement and at a meeting of the Global Polio Eradication Initiative in New York, leaves just two countries—Pakistan and Afghanistan—on the list.

In declaring Nigeria “no longer polio endemic,” the WHO said: “This is the first time that Nigeria has interrupted transmission of wild [naturally occurring] poliovirus, bringing the country and the African region closer than ever to being certified polio-free.” The last case was in the Sumaila district of Kano state, northern Nigeria, on July 24, 2014.

Countries have to go at least 12 months without a case before they can be considered for removal from the list while polio-free status comes after three years without a case. The WHO said “all laboratory data have confirmed a full 12 months have passed without any new cases.”

The announcement is the latest good news in the global battle against the virus, which is spread by poor sanitation and contaminated water and can cause irreversible paralysis. Children under-five are particularly vulnerable.

On Aug. 12, Africa marked one year since the last recorded case of polio—in Somalia—raising hopes of its elimination across the continent.

But there is still concern about vaccination gaps, particularly in hard-to-reach areas, that could hinder the complete eradication of the disease.

In 2015, 41 cases of wild poliovirus have been reported worldwide—32 in Pakistan and nine in Afghanistan.

Nigeria has had to battle major security issues to vaccinate children in areas of the remote northeast hit by Boko Haram’s bloody six-year Islamist insurgency. It has also had to overcome rumors the vaccine caused infertility, leading to many parents, particularly in the Muslim-majority north, refusing to have their children immunized. Similar issues have been faced by health workers in Pakistan and Afghanistan.

“The outstanding commitment and efforts that got Nigeria off the endemic list must continue, to keep Africa polio-free,” said WHO director-general Margaret Chan. “We must now support the efforts in Pakistan and Afghanistan so they soon join the polio-free world.”

Ado Muhammad, executive director of the National Primary Health Care Development Agency in Nigeria, added: “We Nigerians are proud today. With local innovation and national persistence, we have beaten polio. We know our vigilance and efforts must continue in order to keep Nigeria polio-free.”

Rotary International and the Bill and Melinda Gates Foundation, both part of the Global Polio Eradication Initiative (GPEI), said the achievement was down to hard work and commitment from everyone involved. When the GPEI was set up in 1988, more than 350,000 children were paralyzed every year in more than 125 endemic countries but cases have since reduced by more than 99 percent.

Nigeria has been praised for its use of technology to identify vaccination gaps as well as its creation of emergency operations centers to tackle outbreaks.

The centers were adapted last year during the Ebola crisis, allowing the authorities to successfully prevent a devastating spread of the virus. The WHO has called for “continued vigilance” to keep polio at bay. Earlier this month it said a baby brought to Mali from Guinea was found to have the virus derived from the oral polio vaccine (OPV).

The vaccine, which contains small amounts of weakened but live polio virus, replicates in the gut and can—in rare cases—be passed to others through fecal-contaminated water. Several similar vaccine-derived cases have been recorded in Madagascar and Nigeria since August last year, while there were also two cases in Ukraine.

WHO has recommended that OPV be phased out worldwide and replaced by the inactivated polio vaccine (IPV).