WHO Warns of COVID-19 Spike in Pakistan Without ‘Effective Interventions’ 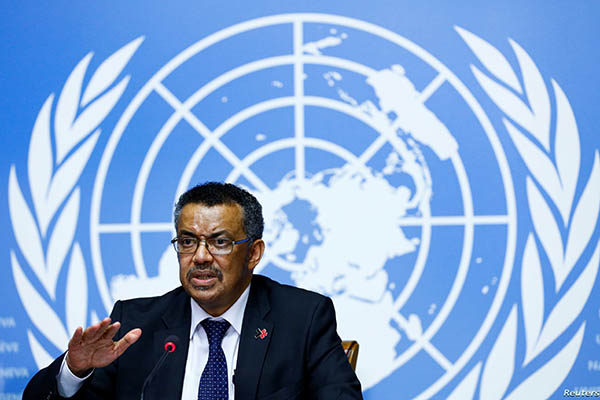 The World Health Organization (WHO) on Thursday warned that the number of coronavirus cases in Pakistan could exceed 200,000 by mid-July if the country does not take “effective interventions” to curb its spread.

Launching the Pakistan National Strategic Preparedness and Response Plan via virtual conference, WHO Director General Dr. Tedros Adhanom said that the economic impact of the rapid spread of COVID-19 would be just as devastating as easing restrictions to boost the economy.

“Without effective interventions there could be an estimated 200,000+ cases by mid-July,” he was quoted as saying. “The impacts on the economy could be devastating, doubling the number of people living in poverty,” he said. “We must act in solidarity, with a coherent, coordinated approach,” he added.

Prime Minister Imran Khan has repeatedly come out against movement restrictions to curb the spread of the novel coronavirus, saying Pakistan cannot afford sustained lockdowns. He has claimed that more people would die of hunger than coronavirus if the government did not ease lockdowns—despite doctors advising against it.

On Thursday, a doctor in Lahore said that no people had died of hunger during the recent lockdowns; more than 200 had died due to the coronavirus.

During the WHO virtual conference, Dr. Adhanom said “Pakistan’s COVID-19 Response Plan is a joint strategy of the Government of Pakistan, the U.N. and partners.” He said it was aligned with U.N. Global Goals, Pakistan’s National Action Plan and WHO’s Global Strategic Preparedness and Response Plan.

“When this year began, little was known about COVID-19. Now, it has spread globally, upending health systems and economies, and putting lives and livelihoods at risk,” he said, adding that the virus had already spread in more than 115 districts of Pakistan—largely in Punjab and Sindh provinces. “The COVID-19 outbreak is creating significant additional pressure on an already overburdened health system, exacerbating the vulnerabilities of affected populations,” he added.

The WHO chief said, in line with the Government of Pakistan’s Ehsaas program, that “particular attention must be paid to mitigating the socioeconomic and nutritional impacts of the COVID-19 pandemic on the most vulnerable.” He added: “The whole-of-government approach reflected in the plan enables resources to be adapted to support the most effective public health interventions as more is learned about both the virus and the key risk groups.”

He said the required funding for the plan was $595 million, which would be allocated to support various measures:

The WHO virtual conference occurred as Pakistan neared 11,000 confirmed cases of the novel coronavirus with 224 deaths.

Addressing the launch ceremony, Foreign Minister Shah Mahmood Qureshi said saving people from hunger and the pandemic were the utmost priorities of the government. Referring to the Plan as the “blueprint” for Pakistan to fill the gaps in combating COVID-19, Qureshi said the virus was a “wakeup call for the world” and global solidarity was needed more than ever.

He urged global leaders to come together against a “common enemy.”

During the organization’s coronavirus briefing on Monday, Tedros Adhanom Ghebreyesus said he was “appalled” by the comments from the scientists at a time when there was need for global “solidarity” to defeat the march of the pandemic. The comments, made during a discussion on French television last week, were centered on the launch of trials in Europe and Australia to see if a tuberculosis vaccine could be used to treat the virus.