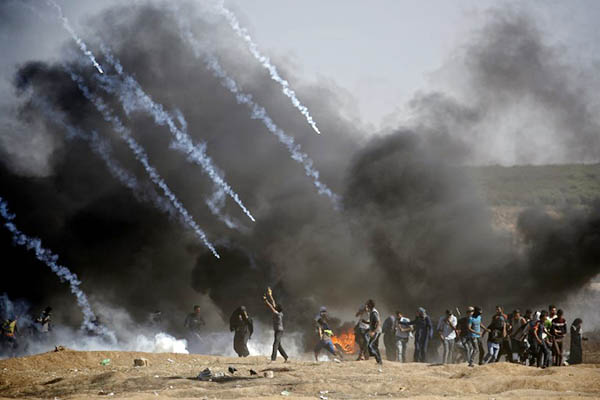 The U.N. human rights chief on Friday slammed Israel’s deadly reaction to protests along the Gaza border as “wholly disproportionate,” backing calls for an international investigation.

Addressing a special session of the U.N. Human Rights Council on the violence which has claimed more than 100 Gazan lives in six weeks, Zeid Ra’ad Al Hussein warned that “killing resulting from the unlawful use of force by an occupying power may also constitute willful killings, a grave breach of the Fourth Geneva Convention.”

Violations of the Geneva Conventions adopted in 1949 following World War II are commonly called “war crimes” although Zeid did not explicitly use that word.

He pointed out though that while 60 Palestinians were killed and thousands injured in a single day of protests that coincided with Monday’s move of the U.S. embassy from Tel Aviv to Jerusalem, “on the Israeli side, one soldier was reportedly wounded, slightly, by a stone.”

“The stark contrast in casualties on both sides is … suggestive of a wholly disproportionate response,” he told the council. “Nobody has been made safer by the horrific events of the past week,” he said.

The special U.N. session comes after six weeks of mass protests and clashes along the Gaza border with Palestinian refugees demanding the right to return to their homes inside what is now Israel. Israel has justified its actions, arguing it was necessary to stop mass infiltrations from the blockaded Palestinian enclave, which is run by the Islamist Hamas movement.

The council is due to consider a draft resolution calling for the urgent dispatch of “an independent, international commission of inquiry”—the U.N. rights council’s highest-level of investigation.

The draft resolution, which was presented by Pakistan on behalf of the Organization of Islamic Cooperation and backed by 47 U.N. member states, said investigators should probe “all violations of international humanitarian law and international human rights law … in the context of the military assaults on large-scale civilian protests that began on March 30, 2018.”

It said the aim should be to “establish the facts and circumstances” around “alleged violations and abuses including those that may amount to war crimes and to identify those responsible.”

Zeid said he supported the call for an investigation “that is international, independent and impartial, in the hope the truth regarding these matters will lead to justice.”

Israeli ambassador to the U.N. in Geneva, Aviva Raz Shechter, meanwhile slammed the special session on Friday, saying it was “politically motivated and won’t improve the situation on the ground by even one iota.”

“The unfortunate outcome of Monday’s riots can only be attributed to Hamas’s cynical exploitation of its own population, in a violent campaign against Israel,” she said.

The council session would only serve to “empower Hamas and reward its terror strategy and its use of civilians as human shields to advance its terror activities against the citizens of Israel.”

U.S. representative Theodore Allegra also charged that the U.N. session was “blatantly taking sides and ignoring the real culprit for the recent outbreak of violence, the terrorist organization Hamas.” But Zeid insisted that many of those injured and killed on Monday “were completely unarmed, [and] were shot in the back, in the chest, in the head and limbs with live ammunition,” he said, saying there was “little evidence of any [Israeli] attempt to minimize casualties.”

He said, “some of the demonstrators threw Molotov cocktails, used slingshots to throw stones, flew burning kites into Israel and attempted to use wire-cutters against the two fences between Gaza and Israel.” But he added: “these actions alone do not appear to constitute the imminent threat to life or deadly injury which could justify the use of lethal force.”