Home Lightbox Why Did Attacks on ‘Charlie Hebdo’ Mobilize So Many?

Why Did Attacks on ‘Charlie Hebdo’ Mobilize So Many? 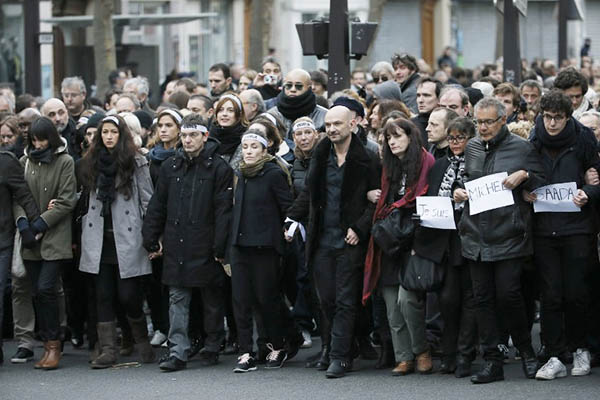 Violence in war-torn countries is harder to understand by Western world, according to analysts.

The Madrid, London and 9/11 attacks saw more people die than the Paris killings, not to mention recent bloodbaths in Pakistan and Nigeria, but millions in France and abroad took to the streets in defiance. Why?

The worst Islamist attack on European soil in nearly a decade, the three-day massacre that left 17 people dead in France was widely perceived as an assault on freedom of expression in a country known for “liberty, equality, fraternity,” experts say.

Millions marched on Sunday in an unprecedented show of defiance for a nation already well versed in protests, joined by dozens of world leaders in a historic display of solidarity. Tens of thousands more rallied around the world, and the little-known Charlie Hebdo magazine whose cartoonists were mowed down became a rallying cry for freedom as non-French speakers sported the “Je suis Charlie” slogan, not least George Clooney at the Golden Globes.

Part of the reason for this global mobilization, experts say, was the fact that brothers Cherif and Said Kouachi killed people for speaking and drawing their mind—in this case because of the weekly’s past depictions of Islam’s Prophet.

“Cartoonists, friendly journalists, were massacred because they made us smile,” psychiatrist Boris Cyrulnik told the Le Figaro daily. The targeting of a policewoman and the anti-Semitic killings of four hostages in a Jewish supermarket by the third gunman Amedy Coulibaly added to the outrage.

In the minds of many, France has also embodied freedom and human rights since the revolution. “We have not always lived up to the principles we stake a claim to, far from it, but even when the state failed, there were always great men, great Frenchmen whose names remain famous and revered across the five continents,” radio journalist Bernard Guetta said.

On top of that, Europeans were likely shocked by what was the worst Islamist assault on the continent since the London bombings in 2005. Shashank Joshi, senior research fellow at the Royal United Services Institute defense and security think-tank, said the most serious terror attack before the Paris killings was Anders Behring Breivik’s 2011 massacre in Norway that left 77 dead. “But Breivik’s attack, horrific and destructive as it was, was not necessarily widely perceived as being part of an organized, ideological network that has threatened us over a sustained period of time,” he said.

Some have pointed out that on the same day the Kouachi brothers waged the Charlie Hebdo assault last week, extremist group Boko Haram staged a horrific attack in northeast Nigeria, destroying at least 16 towns and villages. One survivor recounted how he had to step over body after body for kilometers as he sought help, yet this bloodbath went almost unnoticed.

“There is an element of cultural exclusion, even racism,” Joshi acknowledged. “But it’s also difficult for us to understand a more distant and culturally unfamiliar society like Pakistan, Nigeria or Yemen, with very complex politics and insurgency, than it is to understand a liberal democracy within the European Union like France. An attack in Paris is fundamentally more unusual and therefore perceived as more shocking than an attack in a country that is extremely violent.”

Regardless of the reasons, Sunday’s mobilization brought together a country that had been deeply disunited as stagnant growth and record unemployment took their toll. “We have been told again and again that we are a directionless society, and all of a sudden, we realize we have the biggest point of reference there is: the principle of freedom,” said sociologist Francois de Singly. “Of course it’s not enough to solve the problem of unemployment and other problems, but it’s one of the big federating principles in France.”

But what of the impact of the mammoth mobilization on jihadists themselves—on lone wolves such as the Kouachi brothers or Coulibaly? “When you have jihadists who are acting as insurgents, as in within Iraq, they may have a greater need to win the loyalty of the population and therefore adjust their targets,” said Joshi. “But these lone wolves are not necessarily all that sensitive to public opinion or even Muslim opinion.”

Experts say it is too early to tell whether France’s newfound unity will last, but de Singly warned it was crucial to avoid a French-style counter-terrorism Patriot Act, adopted after 9/11 to give the U.S. government sweeping new powers of surveillance. “If security smothers freedom, then the Charlie Hebdo cartoonists will be killed a second time.”

Terrorism generates abhorance, resistance, unity, resistance, condemnation and ultimate defeates the perpetuators of terror and their cause. Such is the weakness in Terror tactics.

Even in india, a famous muslim painter drew naked photos of a Hindu goddess, people felt insulted, and they forced him into exile. But they did not kill him, nor other innocents.
Islam is being seen globally not as a religion of peace, but a religion of intolerance.

”Even in india, a famous muslim painter drew naked photos of a Hindu goddess”

If a Hindu did the same in Pakistan or Bangladesh, there would be bloodbath and thousands would have bee killed.