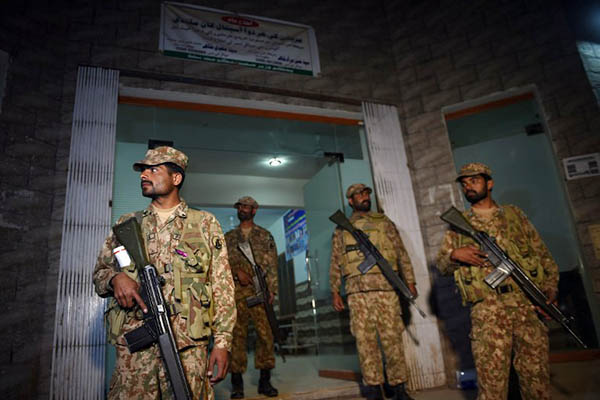 There is little evidence to support claims Pakistan’s oldest boogeyman is behind the recent rise in terror attacks.

Over 100 people have been killed in six terror attacks across Pakistan in the past five days as extremist groups renew their bid to exert influence through violence. While the government has urged caution and said investigations are ongoing to determine the true culprit, local media has found its boogeyman: India. Whether claimed by Pakistani Taliban offshoot Jamaat-ul-Ahrar or the Islamic State militant group, they say, the attacks were perpetrated by terrorists based in Afghanistan, whose intelligence agency retains close ties with India. As such, they maintain, these attacks are intended to destabilize Pakistan enough to make it forget Kashmir.

Finding support for these beliefs on TV, many Pakistanis on social media have also become convinced that the facilitator of the latest strikes can only be India. They assume—based on past evidence—that once this chant gains sufficient momentum, the Pakistan Army would give a “desired” response. But while the potential involvement of foreign elements cannot be dismissed, the knee-jerk blaming of India is a new development.

Pakistan’s own war on terror has lasted over a decade now and the country has become familiar with the militant groups that often claim them. In the past, we seldom blamed India; and when we did, it rarely resonated with the world. In fact, every time India has blamed Pakistan for terrorism on its soil—even when unreasonably—the world has tended to side with New Delhi. So why should the carnage at the Lal Shahbaz Qalandar shrine in Sehwan be blamed on India?

In 2005, the Barri Imam shrine in Islamabad was targeted. Five years later, a suicide bomber attacked the Data Darbar shrine in Lahore. In neither case did people rush to blame India. People knew that the Shia Barri Imam was destroyed in retaliation for the killing of the founder of Islamabad’s Lal Masjid. Similarly, when Al Qaeda chief Osama bin Laden was found living in Abbottabad, no one blamed India.

Jamaat-ul-Ahrar, while claiming its attack on Lahore’s Charing Cross, dubbed it Operation Ghazi after the Lal Masjid’s Rasheed Ghazi, who was killed in a Pakistan Army raid against terrorists holed up in the madrassa. The Zarrar Company of Army commandos who carried out the Lal Masjid operation were all killed—not by India—but by a child suicide-bomber taken into their mess by a fellow-commando who had defected to Al Qaeda.

The sad reality is that Islamabad is losing its writ and Pakistan’s ungoverned spaces are increasing, with unregistered, perpetually inward-looking, rejectionist madrassas stepping in to fill the gaps. These people denounce Pakistan as a slave of “pagan” democracy. It is them, and not India, who Pakistanis need to perceive as their enemies.

When high ranking government officials in India such as the national security advisor openly talk about waging a war against Pakistan, isnt that enough for a layman to add India in the suspicious list?