Home Latest News Why is it so Difficult for the U.S. to Crack Down on Pakistan?

Why is it so Difficult for the U.S. to Crack Down on Pakistan? 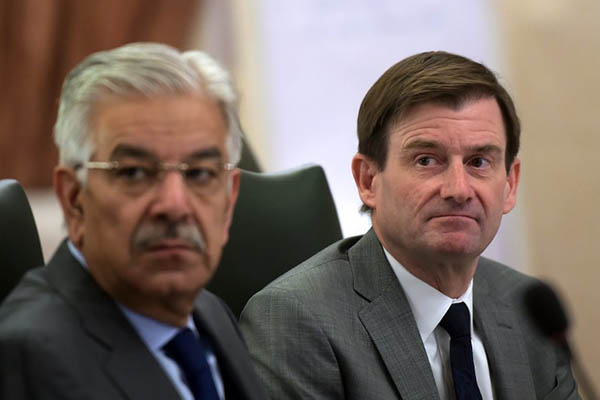 Unless Washington addresses Islamabad’s fears over New Delhi, it will be unable to muster the kind of action it wants

Washington accuses Pakistan of playing a dangerous double game, taking billions in U.S. aid while supporting militants attacking its forces in Afghanistan, including the Taliban. Its belated move to suspend assistance, after years of mistrust, highlights the perils of alienating a quasi-ally whose support is vital in the long-running Afghan conflict.

The dramatic freeze in deliveries of military equipment and security funding comes after President Donald Trump lambasted Pakistan for its alleged support for militant safe havens, including in a furious new year tweet.

What does the US want from Pakistan?

Washington and Kabul accuse Pakistan of cynically supporting militant groups including the Afghan Taliban and the Haqqani Network. They say the insurgents have safe havens in Pakistan’s border areas and links to its shadowy military establishment, which aims to use them in Afghanistan as a regional bulwark against arch-nemesis India.

Pakistan’s support for these groups must end, Washington insists. Islamabad has repeatedly denied the accusations, insisting it has eradicated safe havens and accusing the U.S. of ignoring the thousands who have been killed on Pakistani soil and the billions spent fighting extremists.

It also levels the same charge at Kabul, accusing Afghanistan of harboring militants on its side of the border who then launch attacks on Pakistan.

Why hasn’t Washington axed aid before?

U.S. figures show that more than $33 billion has been given to Pakistan in direct aid since 2002. Given fears Pakistan is being duplicitous, cutting the money off seems an obvious step. It has been suspended before, notably after the U.S. raid on Abbotabad in 2011 that killed Al Qaeda leader Osama bin Laden.

The discovery of the world’s most wanted man, less than a mile from Pakistan’s elite military academy, drew suspicions that he had been sheltered by the country’s intelligence agency for years. But despite the provocations, the U.S. does not want to completely rupture its relationship with Pakistan, where anti-American sentiment already runs high.

Washington’s footprint in Afghanistan is much smaller than it was at the height of the war, and it needs access to Pakistan’s supply lines and airspace.

Pakistan is still believed to have the strongest influence over the Taliban, making its cooperation necessary for peace talks. Pakistan also holds the Muslim world’s only known nuclear arsenal and the U.S. wants to prevent it from going to war with rival nuclear power India, or collapsing and allowing the weapons to fall into the hands of extremists.

“They want to apply graduated pressure to Pakistan to change its policy, rather than abandon it altogether,” security analyst Hasan Askari said.

Will the U.S. strategy work?

Some analysts have said there is no real way to pressure Pakistan, which believes keeping Kabul out of nemesis India’s orbit is more important than clamping down on cross-border militancy.

Askari warned the suspension of millions of dollars in security assistance might see the U.S. lose crucial influence over Pakistan, which will instead look to other countries for support.

China—which is investing some $60 billion in infrastructure projects in Pakistan—was the first to rush to Pakistan’s defense after Trump’s latest tweet criticizing its militant policy.

But China may also prove to be intolerant of any double-dealing with extremists. It has a horror of Islamist militancy and its own interests in keeping Pakistan and Afghanistan stable, from protecting its investment to ensuring security on the borders with its vast, restive western province of Xinjiang.

In the end, observers say, until Washington addresses Pakistan’s fears over India, it will not shake its support for militant proxies. “There’s no amount of bribery or threat that can ultimately make people act against what they consider to be their core interests,” tweeted journalist Murtaza Mohammad Hussain.

Eversince Pakistan was roped in to the US sponsored military alliances to contain rhe Soviet Union/the the People Republic of China’s Communism, Islamabad always “Lied”and “deceived”” and made “fools” .Of course Trump belatedly ackwnoledged Pakistan’s diabolical duplicity.It is an ackwnoledged fact that the US personnel are killed on the soil of Afghanistan by Taliban with the connivance of Pakistan .On the other side Afghanistan terrorist groups are targeting civilians in Pakistan showing that neither Islamabad nor Kabul have a keen interest in eliminating terrorists.
Kabul and Islamabad are providing safe sanctuaries across their borders for “Hit” and “Run” . When the US announced $235 millions cut under Mutual Security Assistance Act, Pakistani army reacted in strong words that $33 billions aid received so for can not be matched with the loss of life of Pakistan.But at the same time it corned Trump for his failure to exert pressure on Afghanistan leadership, army,and corruption.
Soon after the ascendency of Trump at the helm of affairs, the US preferred India’s role either in Asia – Pacific or in Afghanistan much to the chagrin of Pakistan. To fill the vaccum created by the US aid cut , Islamabad moved closer to Beijing and adopted Yuan as foreign exchange jolt to America.Pakistan also succeeded in its efforts to get Afghanistan in to the orbit of China’s Road and Belt Policy.The aim of China to drive American influence away from Asia and elimination of terrorists in Xiang province may become reality.
America must engage Pakistan atleast for time being to use air space till the elimination of the Haqqani terror net work