Home Latest News Why is Part of the Amazon Rainforest Burning? 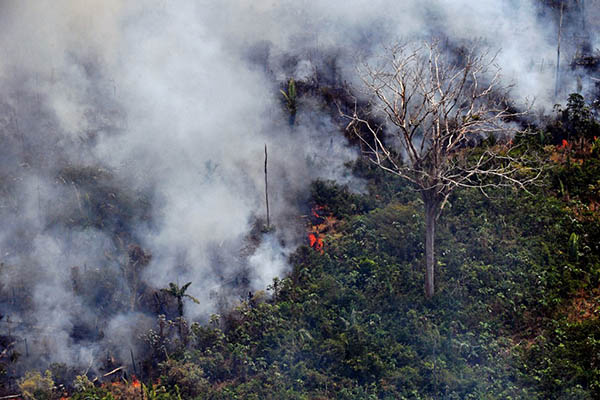 The thousands of fires burning in the Amazon don’t look like the major forest fires of Europe or North America—instead, they are fueled mainly by branches, vegetation and other byproducts of deforestation in cleared areas, experts say.

The dramatic scale of this year’s fires is the result of a significant acceleration of deforestation for the lumber industry, for agriculture or for other human activities. “In the tropics, fire is used extensively in a land-use environment,” said Jeffrey Chambers, a scientist at the Lawrence Berkeley National Laboratory and a specialist in rainforests. “It’s how you get rid of your agricultural waste products… And part of the reason why that works is because those fires don’t generally move into the forest,” he explained. “A tropical rainforest is generally not flammable” because it’s so humid.

California has the opposite problem: burning waste is prohibited because the forests are so dry, they could go up in flames at the smallest spark. But in the Amazon, when an area of forest is cleared, the tree trunks are removed and the rest of the vegetation is burned on the spot during the dry season, which lasts from July to November.

For farmland, or for prairies, brush and weeds alike are heaped together, waiting for the dry season. That’s what is burning right now. Even when the fire manages to penetrate the dense forest—called “primary” when it is still untouched—it usually stays in the vegetation at ground level and generally does not reach the treetops, about 100 feet up.

The effect is just as devastating, though, because the tree trunks are damaged at ground level, but the overall image differs vastly from the massive fires that Europeans or Americans are used to seeing. Human use of fire to manage land explains the astronomical number of fires—more than 75,000—recorded by Brazilian authorities since January.

The fires have made the deforestation visible, according to Paulo Brando, an assistant professor at the University of California, Irvine and a scientist at the Woods Hole Research Center. “You can see the fires as the final phase of deforestation,” he said.

Amazon deforestation began in earnest in the 1970s, reaching its peak rate at the end of the 1990s and the start of the 2000s. In 2004, about 28,000 square kilometers of forest had been cleared in Brazil alone (the Amazon spreads over nine countries, but 60 percent of the rainforest is in Brazil). Deforestation then slowed down significantly. It picked up again in 2014, but it never reached the same level as the previous decade. Last year, about 2,900 square miles disappeared, according to Brazil’s National Institute for Space Research (INPE).

But the trend reversal is worrisome. In July alone, more than 870 square miles were cleared. Additionally, the dry season isn’t over. Will the fires bite into intact forest?

“Right now, we are seeing mostly increases in deforestation-related fires, which may or may not escape into primary forests, depending on how dry it’s going to get in the next few months,” said Brando.

And how will that affect climate change? Forests contain carbon, stored in the trees and vegetation—to the tune of 459 tons per hectare in the Amazon, said Diego Navarrete, a carbon specialist at the NGO The Nature Conservancy.

When a tree is cut, the carbon inside will reenter the atmosphere years later, at the end of its use cycle when it decomposes. When vegetation is burned, as is happening now, the carbon enters the atmosphere immediately. In both cases, the carbon will be released. It just takes some simple math to realize that the total for the past few months has already reached hundreds of millions of tons of carbon.