Home Lightbox Why Should You Care About Gravitational Waves? 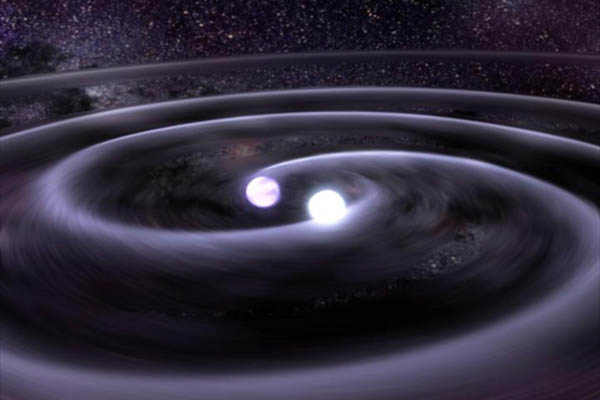 The discovery of long-suspected phenomenon indirectly proves existence of black holes and could be revolutionary for field of astronomy.

Great excitement rippled through the physics world on Thursday at the announcement that gravitational waves have been detected after a 100-year search. Here’s what it means:

What are gravitational waves?

Albert Einstein predicted gravitational waves in his general theory of relativity a century ago. Under this theory, space and time are interwoven into something called “spacetime”—adding a fourth dimension to our concept of the Universe, in addition to our 3D perception of it.

Einstein predicted that mass warps space-time through its gravitational force. A common analogy is to view space-time as a trampoline, and mass as a bowling ball placed on it. Objects on the trampoline’s surface will “fall” toward the center—representing gravity. When objects with mass accelerate, such as when two black holes spiral towards each other, they send waves along the curved space-time around them at the speed of light, like ripples on a pond. The more massive the object, the larger the wave and the easier for scientists to detect.

Gravitational waves do not interact with matter and travel through the Universe completely unimpeded. The strongest waves are caused by the most cataclysmic processes in the Universe—black holes coalescing, massive stars exploding, or the very birth of the Universe some 13.8 billion years ago.

Why is the detection of gravitational waves important?

It ended the search for proof of a key prediction in Einstein’s theory, which changed the way that humanity perceived key concepts like space and time.

So-called primordial gravitational waves, the hardest kind to detect and not implicated in Thursday’s announcement, would boost another leading theory of cosmology, that of “inflation” or exponential expansion of the infant Universe.

Primordial waves are theorized to still be resonating throughout the Universe today, though feebly. If they are found, they would tell us about the energy scale at which inflation occurred, shedding light on the Big Bang itself.

Why are gravitational waves so elusive?

Einstein himself doubted gravitational waves would ever be detected given how small they are. Ripples emitted by a pair of merging black holes, for example, would stretch a one-million-kilometer ruler on Earth by less than the size of an atom.

Waves coming from tens of millions of light years away would deform a four-kilometer light beam such as those used at the Advanced Laser Interferometer Gravitational Wave Observatory (LIGO) by about the width of a proton.

How have we looked for them?

Before now, gravitational waves had only been detected indirectly.

In 1974, scientists found that the orbits of a pair of neutron stars in our galaxy, circling a common center of mass, were getting smaller at a rate consistent with a loss of energy through gravitational waves. That discovery earned the Nobel Physics Prize in 1993. Experts say the first direct detection of gravitational waves is likely to be bestowed the same honor.

After American physicist Joseph Weber built the first aluminium cylinder-based detectors in the 1960s, decades of effort followed using telescopes, satellites and laser beams. Earth- and space-based telescopes have been trained on cosmic microwave background, a faint glow of light left over from the Big Bang, for evidence of it being curved and stretched by gravitational waves.

Using this method, American astrophysicists announced two years ago they had identified gravitational waves using a telescope called BICEP2, stationed at the South Pole. But they later had to admit they made an error.

Another technique involves detecting small changes in distances between objects.

Gravitational waves passing through an object distort its shape, stretching and squeezing it in the direction the wave is travelling, leaving a telltale, though miniscule, effect. Detectors such as LIGO at the center of Thursday’s news, and its sister detector Virgo in Italy, are designed to pick up such distortions in laser light beams.

At LIGO, scientists split the light into two perpendicular beams that travel over several kilometers to be reflected by mirrors back to the point where they started. Any difference in length upon their return would point to the influence of gravitational waves.