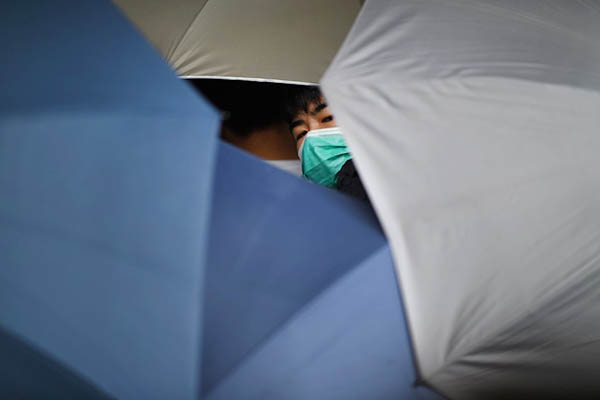 Video of a Chinese office worker being punched by a Hong Kong democracy supporter as a crowd chanted “go home” has caused outrage on the mainland, highlighting widening polarization in the financial hub.

Footage shot by both reporters and protesters showed a white-shirted man being punched repeatedly outside the entrance to JPMorgan by a single masked protester on the sidelines of a rally in Hong Kong’s commercial district on Friday.

Bloomberg News reported that the man worked for the American bank, which said it was boosting security outside its offices in an internal memo sent to staff. It is not clear how the altercation started.

Footage begins with the man, who speaks Mandarin, surrounded by media photographers as an angry crowd chants “go back to the mainland.” He makes his way through the press scrum to the door of his office building before turning to the crowd and shouting “We are all Chinese.”

Shortly after a masked man punches him multiple times, knocking off his glasses.

The clip has gone viral in mainland China, where news about Hong Kong is strictly censored. One version of the video on the Twitter-like Weibo platform describing the attacked JP Morgan worker as “very brave,” had received more than 11.2 million views and 91,000 likes by Sunday morning. Comments were filled with anger towards Hong Kongers.

“Just because he speaks Mandarin and thinks ‘we are all Chinese,’ why should he be punched and have his glasses knocked off?” asked one commentator under the name Aubrey. “You have to pull up the roots [of Hong Kong] and leave nothing behind. They have had enough tolerance,” another added.

Some comments hit out at a photographer who appeared to block the door to the office to take pictures.

Chinese state media focuses on the worst excesses of the violence while downplaying, or blocking, the popular public anger in Hong Kong towards Beijing. Authorities also remove viral videos on social media that are sympathetic to the protests, but tend to allow footage that reflects poorly on the pro-democracy movement.

In the early days, fights were rare. But on July 21, a mob of Beijing supporters wielding sticks attacked protesters in the town of Yuen Long, hospitalizing more than 40 people.

Other attacks by Beijing supporters occurred in the district of North Point, while democracy supporters assaulted two men accused of being Chinese spies during an airport sit-in in August. In recent weeks, fights across the ideological divide have intensified and pro-democracy protesters have repeatedly surrounded and attacked people.