Home Opinion Will the U.S. Go Big or Stay Home?

Will the U.S. Go Big or Stay Home? 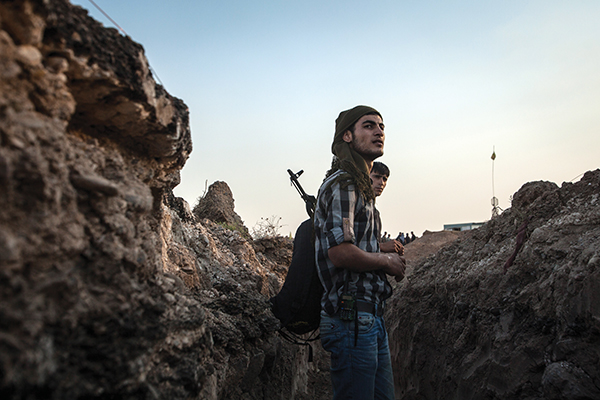 On Syria, there aren’t many good options for the United States. But Barack Obama has chosen the worst of them all.

[dropcap]T[/dropcap]he complexities of the Syria conflict touch on American interests in myriad ways—ways that don’t necessarily line up neatly with one course of action or another. There are multiple goals, and multiple strategies that could be employed to achieve those goals, and as a result, there are good arguments to be made both for intervention and against. The only thing that makes no sense, unfortunately, is the path that President Barack Obama appears determined to pursue.

The administration constantly stresses the arguments against intervention. Yet at the same time, Obama has also demanded that Syrian strongman Bashar al-Assad must go, laid down a red line against the use of chemical weapons, and green-lighted the provision of small arms and small-unit training to the rebels. Such actions are not consistent with one another or with any strategically sensible approach. Instead, they appear to be the product of a White House that is trying to have it both ways.

Because Washington is not willing to match its rhetoric about wanting to see Assad gone with actions, it instead looks for marginal—even rhetorical—ways to appear as if it is doing something. But that is the worst thing the United States could do. It leads to half measures piled on top of half measures, committing the U.S. deeper and deeper without coming any closer to reaching any meaningful goal. This is exactly how the United States ended up backing into Vietnam.

Put simply, the Obama administration must choose one of two overall strategies: do nothing or pursue an intervention far more decisive than limited strikes.

The case for America staying out of Syria has largely been articulated by the administration itself. The first element of the argument is that the United States has no vital interests in Syria. But the argument also rests on the understandable fear that almost any course of action could result in an unappealing outcome. Assad is obviously brutal and his regime cannot be allowed to regain control of the country, but the rebellion is increasingly dominated by Islamist extremists who might well massacre Alawis, Druze, Christians, and other minorities if they prevail. That’s not something the United States would want to support. Moreover, all signs indicate that if the current opposition defeated the regime, its component militias would likely immediately begin killing one another in yet another internecine struggle for power. The conflict would not actually end, it would just change. This is a typical pattern in civil wars, with groups in Lebanon, Congo, Somalia, and Afghanistan regularly shifting who they were fighting—and thereby prolonging the bloodshed.

In addition, any intervention by the United States could mean a repeat of its Iraq experience. The Syrian civil war is distressingly analogous to Iraq’s in 2006. You might say that the “good news” is that with the lessons of Iraq (and Afghanistan) in its hip pocket, the United States probably could do a better job in Syria than it did in Iraq. It probably could shut down the fighting and start a constructive political process faster. However, in the best case, this effort would still require a couple of hundred thousand troops in Syria for a year or more, decreasing numbers for years thereafter, and tens if not hundreds of billions of dollars on both the military and civilian sides of reconstruction. Although not all of those troops or those dollars would have to be American, a significant number would—at least tens of thousands of troops and tens of billions of dollars. And that is not something many Americans are interested in signing up for right now.

The Case for War

The case for intervention rests on three different arguments. The first of these is the humanitarian one. More than 100,000 Syrians have died in two years—that is the same number killed in almost four years of fighting in Bosnia, where the death toll was cited as a key motive for intervention by the U.S. and European powers. Only a fraction of that number had died in Libya when the U.S. and NATO intervened there in 2011 to prevent a humanitarian calamity. Absent decisive foreign intervention, the Syrian civil war will probably roil on for years, perhaps even decades, and will likely result in hundreds of thousands more killed. Around 1.5 million Syrians have fled to neighboring countries with more joining them every day and millions more internally displaced. While most Americans believe that the United States does not have a responsibility to intervene to prevent all humanitarian tragedies, most also believe that the U.S. should intervene to prevent the worst humanitarian disasters, and many have argued that Syria constitutes just such a case.

The second argument revolves around the problem of terrorism. Inter-communal civil wars regularly spawn horrific terrorist groups, and horrific terrorist groups find comfortable bases and breeding grounds amid civil wars. The PLO, Hezbollah, the Tamil Tigers, Al Qaeda, Lashkar-e-Taiba, and countless others were all born of civil wars. Al Qaeda in particular has joined civil wars in Afghanistan, Iraq, Yemen, Sudan, and now Syria—and used them as launching pads for operations elsewhere, including against the United States. The longer that the Syrian civil war burns, the worse that problem is likely to become.

Finally, there is also a geostrategic argument in favor of intervention. The U.S. has no strategic interests in Syria, but it does have them in nearly all of Syria’s neighbors. Turkey is a NATO ally. Iraq is now the second-largest oil producer in OPEC, and civil war in Iraq could threaten other oil producers like Kuwait, Iran, and even Saudi Arabia. Jordan is a fragile ally whose stability is closely linked to Israel, and Israel itself is America’s closest friend in the region. Civil wars like Syria’s invariably cause spillover that can destabilize neighboring states: refugees, terrorists, radicalization of the neighboring populations, the spread of secessionism, economic dislocation, and interventions by the neighbors that themselves prove disastrous. At its worst, spillover from civil wars can cause civil wars in neighboring countries (as Lebanon did with Syria and as Rwanda did with Congo) or can lead to regional wars (as Lebanon did with Syria and Israel, and Congo did for a number of its neighbors). Already, spillover from the Syrian civil war is causing serious problems for all of its neighbors and threatening the stability of Lebanon, Iraq, and Jordan. The longer the war goes on, the worse the spillover is likely to get, and it would arguably be better to shut down the Syrian civil war before it takes its neighbors down with it.

The arguments against intervention create a compelling case that if the United States is going to intervene in Syria, only a very sizable intervention makes sense. It should go big, or stay home. Because of the complex dynamics of inter-communal civil wars more generally and Syria’s specifically, it is going to take a great deal to bring it to an end—let alone an end favorable to American interests. There are options that could work in Syria without committing U.S. ground troops, but they are considerably bigger, and longer term, than the administration currently seems willing to contemplate. The most promising of these would be to arm and train a professional, conventional Syrian opposition army with heavy weapons and a traditional chain of command along the lines of what the United States did with Croats during the Bosnia war (which was relatively low cost, though it was a major effort and took several years to bear fruit). Pursuing this option in Syria would have the added benefit of creating a strong, apolitical institution around which the international community could help the country build a new political process.

What has been sorely lacking so far is the will to choose. It is a hard choice, but that is why the United States has a president: to make exactly these kinds of hard choices.

The administration needs to pick one goal and develop an integrated strategy to try to achieve it. Then all subsequent decisions related to Syria should be determined by what is in the best interests of advancing that strategy. If Obama decides to stay out, then he should stop announcing what is and isn’t acceptable in Syria and develop a strategy to contain the spillover from what is likely to be a long Syrian civil war. In particular, that will mean expending real resources—time, energy, diplomatic clout, and even money or military assets—to shore up all of Syria’s neighbors. If, however, Obama decides to intervene, he needs to recognize that there are limited options that may be worth trying, but the more limited the option, the less likely it is to succeed.

As for what to do about Syria’s alleged chemical weapons use, that answer should also flow from the strategy America chooses. If it decides to stay out, then it should stay out—and launching a very limited response, one that could easily draw it into a wider involvement, would be completely contrary to that approach. If it decides to intervene, then it should see this as an opportunity both to inflict real harm on the regime in Damascus and to justify greater assistance to the rebels, in a way that will have considerable international legitimacy.

The only wrong choice is to treat this moment as somehow unrelated to America’s larger goals and strategy in Syria. Too bad that is what it seems the U.S. is going to do.

Pollack is a senior fellow at the Saban Center for Middle East Policy at the Brookings Institution. From our Sept. 13 & 20, 2013, issue; Go Big or Stay Home.