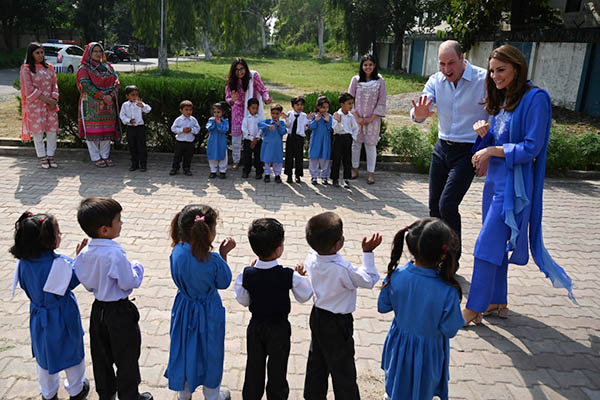 Prince William and his wife Kate signaled their support for women’s education in Pakistan on Tuesday by making a girls school the first stop on their inaugural tour of the patriarchal country.

The couple both wore blue for the visit to the school in the capital Islamabad, with the Duchess of Cambridge draping a long scarf over the shoulder of her royal blue shalwar kameez. The Duke, however, opted for a Western outfit, looking relaxed in a light button-down shirt with no tie.

They dropped in on a mathematics class where televised images showed them sitting with some of the young students, whose blue uniforms matched the Duchess’s dress.

Education official Khadija Bakhtiar told AFP that the couple helped some of the students solve problems. “Both wanted to engage in a natural way… so it was a very nice” visit, she said.

William and Kate spent roughly half an hour at the government-run school, which has an estimated 1,000 students from first to 12th grade, before they were waved off by smiling students. They were whisked away under heavy security to visit conservationists in the Himalayan foothills outside Islamabad, before meeting Prime Minister Imran Khan, an old friend of William’s mother, the late Princess Diana.

Nearly half of Pakistani school-age children—23 million—do not attend school, UNICEF says. Girls are particularly sidelined from education in the traditionally patriarchal country, where women have struggled for basic rights for decades.

Last year, a Human Rights Watch report said 32 percent of primary school-age girls are out of school, compared with 21 percent of boys.

Details of the royal couple’s five-day visit—their first official trip to Pakistan—are being kept under wraps, with security expected to be tight.

In addition to Islamabad, they are set to visit Lahore as well as the mountainous north and the region near the border with Afghanistan in the west.