Home Lightbox Winning Against Who? 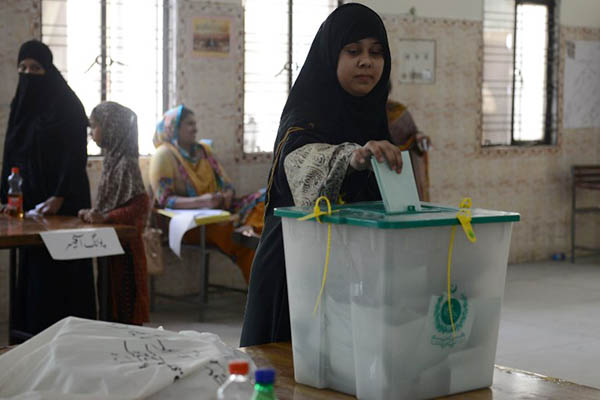 The by-election was prompted by the ouster of Sharif, who was unseated by the Supreme Court in the Panama Papers money-laundering case. Kulsoom Nawaz, receiving medical attention in London for throat cancer, scored her victory with a 9 percent vote margin, which was considered normal because voters often ignore by-elections; subsequently only a third of the registered voters participated in the polls. Maryam Nawaz Sharif, campaigning for her ailing mother, hailed the victory as a knock on “the powers that be”—clearly pointing to the Pakistan Army.

The narrowing of the victory margin was interpreted by a steadily divided media as the rise of the PTI in the PMLN’s Lahore stronghold. The constituency appeared to be loyal but the PTI gain was read on the basis of the change brought about by the dismissal of Sharif. There were over 40 “lesser” candidates who nibbled at the votebank from the margins. Interestingly, jihadi organization Jamaatud Dawa, masquerading as Milli Muslim League, was allowed to contest as an independent candidate—to which the PMLN government had objected in a letter to the Election Commission of Pakistan—and shockingly bagged the third position, beating the better-known Jamaat-e-Islami.

This was considered to be in line with the strategy of “mainstreaming” of proxy warriors recommended to the government by the Army and ignored by the ex-prime minister. This position also lent weight to the PMLN accusation that thousands of its voters were turned away from the polling stations if their identity as PMLN supporters became known. It also went on record as saying that some of its local leaders were kidnapped and taken away to damage the campaign.

If the PMLN is to be believed, the Army has given the party of Imran Khan an edge that presages the future bipartisan politics in the country with PMLN divided down the middle between the Sharif brothers. (Shahbaz Sharif and family carefully decided to be out of the country during the by-polls and observers noted lack of local infrastructure development in the constituency.) This, in the eyes of many commentators, meant the end of the PMLN and the beginning of the rise of PTI in the 2018 national elections.