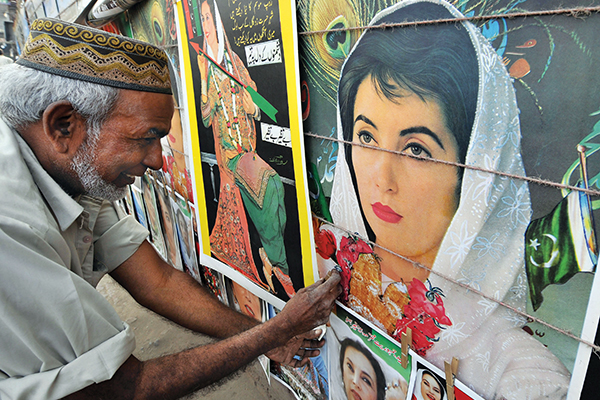 In Pakistan, where has all the election kitsch gone?

[dropcap]I[/dropcap]n Pakistan’s pre-Photoshop past, election campaigns used to lean on kitschy, hand-painted billboards, artwork, and photo illustrations. Some of these fanciful works appeared as recently as 2008, during the last elections. In keeping with the times and out of choice, this year’s markedly insipid campaigns feature the handmade to a far lesser degree.

You won’t see, as people say they previously have, posters with Benazir Bhutto sitting atop a nuclear missile, a clumsy allusion to the sometimes-overlooked fact that her father, Zulfikar Ali Bhutto, founded the country’s nuclear program. Or the former prime minister in another poster with peacock feathers imposed behind her to emphasize her regality; or in another petting an arrow—the election symbol of her party. Bhutto’s nemesis Nawaz Sharif had also been reimagined in several posters. There he was paddling a canoe through choppy, crocodile-infested waters. In another, Sharif stood tall in a pinstriped suit and tie with the words “Talk of the Town” emblazoned to counter his unearned Hicksville image.

“The whole thing has been tidied up,” complains Ijaz ul Hassan, painter and former lawmaker with Bhutto’s Pakistan Peoples Party. “The posters have become studied, flat, and very photographic.” Twenty years ago, the artwork heralding an election campaign was edgy and raw, he says, now everything is airbrushed, sanitized, and looks like “soap hoardings.”

The conspicuous absence of once familiar flourishes makes all the campaigns appear unexcitingly alike. “I don’t see any work that can be called ‘art,’” says Mira Hashmi, who teaches media studies at the Lahore School of Economics. “Though I’m sure some would argue that the very lack of the above makes it some form of accidental art.” She misses the kitsch of yore, the vintage works from unsung artists whose anonymous toiling provided a direct and unique working-class perspective on those running for public office. “They at least had some kind of concept, some shred of a narrative that one could read into. You don’t really see that now.” Hassan agrees. “Artists used to dramatize the candidate,” he says.

In great measure, the move toward the photographic reflects the political class’s yearning to be taken seriously as well as the sobering reality of today’s terrorized Pakistan. Politicians serve as cheap ratings-magnets for cable news channels, where they are encouraged to go head to head in shrill confrontation or are lampooned, more often maliciously than sportingly. Politicians are caricaturized as a species, accused of all manner of actual and imagined crimes and sins. The result is a national loss of faith in the political class and in democracy itself. A British Council report, The Next Generation Goes to the Ballot Box, released on April 3 and based on a nationally representative survey of Pakistanis between the ages of 18 and 29 shows abysmal ratings for political parties and the recently dissolved assemblies: only 29 percent of those surveyed approved of democracy, while the majority—32 and 38 percent respectively—preferred military rule or Shariah.

As predicted widely, the run-up to the May 11 elections for the national and four provincial assemblies has been brutal and bloody. Three provincial capitals—Peshawar, Karachi, Quetta—are under siege with the Pakistani Taliban targeting the PPP, Muttahida Qaumi Movement, and Awami National Party. Dozens have been killed and hundreds injured in elections-related attacks so far. In such somber circumstances, the wildly colored artwork that enlivened previous campaigns is better absent even if it would have conveyed a false sense of normalcy through the familiar.

Where campaigns once relied on slow, painstaking labor to produce billboards on patched-together sheets of tin, candidates for public office now have ready access to any number of printers who mass produce campaign signage in sizes small and large on quickly-replaceable plastic sheets. The technological advancements have already battered the anemic Lollywood film industry’s old publicity cadres, who had once festooned Lahore with neon colored billboards creatively and generously reimagining the proportions of film stars and starlets. (If there’s very little art this election season, there is still the artfulness. Social media is overrun by Photoshopped smears targeting practically all major party leaders.)

The Election Commission of Pakistan has placed unrealistic restrictions on what a candidate can spend on a campaign and on the sizes of his or her publicity material. But this isn’t why there seem to be, for now, fewer old-school hoardings and banners. Billboards are now competing for budget space with far more expensive television spots. All major parties are spending billions of rupees mythologizing their successes. (Some, like the PPP, beset by terrorism threats, are campaigning almost exclusively through TV and newspaper adverts. In its TV ads, Sharif’s Pakistan Muslim League (Nawaz) is airing artists’ renditions of projects it wants to set up when in power.)

The move toward a new set of aesthetics derives also from compulsions of available platforms, convenience, timeliness, and cost-effectiveness. For Imran Khan’s maverick Pakistan Tehreek-e-Insaf, the decision to shun the old in favor of the new is a deliberate one. To signal its seriousness about a “New Pakistan,” the party wants nothing to do with the visual language that older political parties in Pakistan have previously deployed. The PTI is now part of the mainstream political narrative yet claims to defy it. “We don’t use traditional calligraphy,” says Imran Ghazali, head of the party’s social media division. “We have a legitimate slogan, ‘New Pakistan,’ and you won’t see the faces of 10 different politicians stamped on posters in circles.” Of course, the PTI campaign, like that of the PMLN, is all about its party chief anyway.

For painter Hassan, the loss of art and kitsch in the election campaign is a sign that the country’s political culture has been sapped, the “large political vision” and vivacity of mainstream parties having been beaten into whimpering submission by and never truly recovering from Gen. Zia-ul-Haq’s martial law. The uniformity and blandness of the current campaigns reflect the loss in practical terms, he says, of all ideological differences among the parties, each one of them seeming to out-rightwing the others. The rot is clearest in Lahore, he says, which used to be a city of color, posters, images adorning every wall along the streets. “You just don’t find such vivacious expression on the walls and the streets anymore.”

Interesting and well written – we often forget how intricately bound art and politics is. Good job.

A somewhat archaic topic handled admirably. It actually made an interesting read.

In one sentence, Ms Mohydin cleverly ties a seemingly trivial topic to a very pertinent issue that cripples today’s Pakistani climate: “the loss of art and kitsch in the election campaign is a sign that the country’s political culture has been sapped”.

Great article, well-written and subtly balanced. It’s great to see someone finally give weight to inspiration rather than plain old information! To sanitize and strip life out of what was once full of boundless energy, color and insight; only to conform to what we would perceive as “mainstream” methods of campaigning is disappointing to say the least, and perhaps the “wrong” avenue to pursue. To abandon what was culturally significant during the political campaigns before, almost signifies that the parties simply campaign for themselves, rather than the country as a whole and what it stands for. Fantastic that this article was still able to acknowledge the growing need for pragmatism in today’s political arena however…
Well done Ms. Mohydin, looking forwards to reading more of your work.