Home Culture Winning Hearts and Minds With Tea and Biscuits

Winning Hearts and Minds With Tea and Biscuits 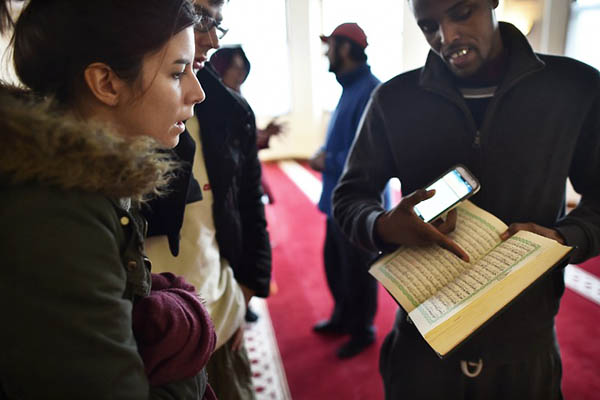 Could anything be more “British” than meeting the neighbors over a cup of tea and some biscuits? That is what greeted curious visitors on Sunday who came through the doors of London’s Finsbury Park mosque, which has long sought to shake off a reputation as a center of radical Islam.

“Come in, come in, you are all welcome,” retired doctor Mohammed Ali Said told visitors to the mosque, whose former imam Abu Hamza was jailed for life in New York on terrorism charges last month. “We don’t have any bombs,” he joked.

The kind-eyed Said was one of a group of volunteers who organized an open day at the mosque, part of a Muslim Council of Britain initiative to promote better understanding of Islam following the recent terror attacks in Paris. As well as cups of tea, visitors were offered English translations of the Quran and the opportunity to read about the Muslim religion and its history on information boards.

After 20 people had arrived, the doctor asked them to remove their shoes and took them to the prayer room to explain the five pillars of Islam: the profession of faith, prayer, giving alms, fasting during Ramzan and making a pilgrimage to Mecca. “Yes, there is a bad history of this mosque but we changed that,” Said told the diverse audience, which included Britons of all ages, a young Spanish couple, and a student doing a doctorate on Islam. “Islam means peace and our greeting when we meet someone is ‘peace be upon you.’ It is the religion of peace,” he added.

It has been over a decade since Abu Hamza’s radical sermons have been heard in the mosque, where he preached from 1997 to 2003 before being jailed for inciting violence. He was later extradited to the United States. “Ten years ago it was different. Since then we’ve worked tirelessly to open our center, our mosque, our activities to the public,” said Khalid Oumar, one of the mosque trustees.

Despite the change in leadership and new focus on community relations, Finsbury Park mosque received a string of threatening emails and letters in the wake of the Paris attacks.

As the day wore on, and visitors kept arriving, the mosque was filled with the sound of laughing children and theological discussion. Annalou Oakland, a 67-year-old artist who lives nearby, said relations with the community had improved.

“There was big fear around this particular mosque in the past and it’s really good to hear what they’re doing and to meet people one-on-one,” Oakland said. “We have more in common than differences.”

It was one of 20 mosques in Britain taking part in the initiative to promote better understanding of the Muslim community, which makes up five percent of the population in England and Wales according to the 2011 census. “There is a lot of misinformation,” said Mireia Borrell, 29, from Catalonia in Spain who has lived in London for almost five years. “It’s easy with all that happened in Paris, with I.S. [Islamic State] and immigration to have maybe the wrong impression.”

French teacher and mosque volunteer Nabil Alex Robbins, 34, who grew up in a Protestant Christian family and converted to Islam, said the event had been “extremely positive.”

“There is a big problem in the West that people, through no fault of their own, do not know that much about Islam,” Robbins said. “We’re here to show people that we are a peaceful mainstream mosque that does not promote extremism in any form and that we are here to promote harmonious relationships between the Muslim community and the wider community.”