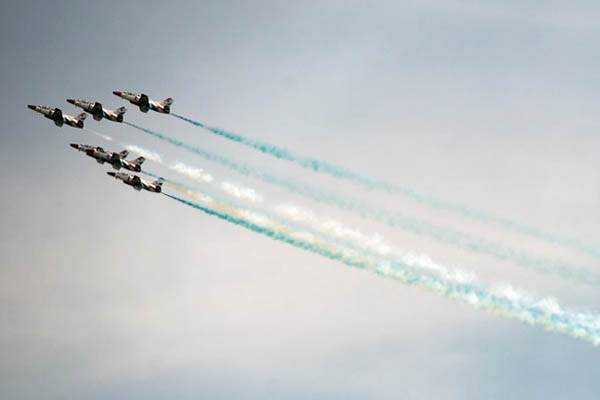 The Pakistan Day parade is a good move, but the military still has a lot of work to do.

On March 23, Pakistan saw its Republic Day military parade after a seven-year hiatus. This long gap was not without reasons. The military, stressed and stretched thin, doesn’t have the time for ceremonial preparedness, fighting as it is a terrible conflict, and a large gathering like Pakistan Day requires a big cost in terms of security arrangements against an enemy that is always lurking in the shadows.

But it was not always like this. The military was, in fact, big on ceremonies. To its own detriment.

When we got into the current mess, popularly called the ‘war on terror’, the Pakistani military had, for the most part, lost its edge. It was focused more on ceremonies, parades and other non-combat activities. Its training had become traditional, both in the realm of theory as well as in the field. The same old manuals were hashed and rehashed. New thinking and innovation, difficult at the best of times in a large-scale bureaucratic organization, were dead. Covert operations were fought by non-state proxies whose ability to innovate, motivate and fight steadily inclined over more than three decades.

That changed with 9/11. The world, led by the United States, came knocking at our door. Overnight, the proxies became a threat. Their agenda, we suddenly realized, exceeded our national interest, a concept grounded in acceptance of a nation-state and sustained through Realist policies, not ideologies, especially not the millenarian kind.

The military got into mortal combat with the proxies and found that while its own training had suffered, it had trained the proxies too well. Result: the military got bludgeoned, sustaining high casualties and losing large swathes of territory to terrorist groups. To its credit, today, it is a far more efficient fighting machine than when this war began. It has learnt to innovate. It has developed new fighting techniques, can use the terrain much better, and has shed its ceremonial pomp for the simplicity and rigor of training. As the adage goes, the more you sweat in peace, the less you bleed in war.

I have never been big on ceremonies and parades. Granted, they are a part of military life; granted also that some ceremonies are important. But it is one thing to use the device and symbolism of ceremonies sparingly and, therefore, effectively and quite another to sacrifice combat training for plumed pomp and ceremonial strutting.

On Aug. 14, 2012, I was invited to the Pakistan Military Academy. Apparently, some PMA commandant had sold the idea of an Azaadi Parade to then Army chief Gen. Ashfaq Pervaiz Kayani. Kayani liked the idea and voila!

I was unimpressed. The parade was great. Parades at PMA are always the best. This is what I wrote at the time:

“…one has to ask the question of why we need another parade at PMA when the institution already has two designated passing out parades in a year. The parade was good, choreographed to a tee. But that is precisely the point: it takes a month-and-half to two months to make it so good, from getting the drill movements right to making all the administrative arrangements. Those daily rehearsals cut into training time.

“And training time is a life-saver, given that we are at war. Consider the contrast: PMA offers two years of infantry training to all cadets. Those who join infantry regiments then go for a six-month Young Officers Basic Course at the School of Infantry and Tactics. Some, as from other arms too, would go on to the Special Service Group. Another nine months. All told, this is more than three years. The Taliban are producing a quality fighter in four to six months with map-reading, signals and field engineering skills, field craft, weapons handling, etc. This is no time to be ceremonial.

“The state is not responding well at any level: motivation, clarity of purpose, operational capabilities, effective intelligence and pre-emption. The war, after a lull, is about to ramp up. The state cannot afford enervation if it doesn’t want to lose.”

The war has ramped up. And there is more to come. The threat we face is protean. It thrives on an idea. The military is much better geared today than it was when the conflict began, though it has to remain vigilant and not rest on any laurels. It has to continue to innovate. In fact, it must reward new thinking and discourage inertia.

Yet, it was important to have the March 23 parade. I would consider this year’s parade as the most significant in our short history. It was motivating and motivation is important for winning wars. Especially a war where the zones of war and peace are one, where a civilian is as exposed, perhaps more, to the ravages of this conflict than those in uniform. This is why I enjoyed this year’s parade more than I did those that I grew up watching, notwithstanding a child’s enthusiasm.

But before I sign off, there’s another point that must not be missed. This is a war where the use of force by the military is just one component of the overall national effort. Since the worst of this war will be seen and fought in the cities, the heartland of Pakistan, it is the police that must be in the frontline. So far, we have not seen much progress in that direction. Unlike the military’s, police’s work is unsexy but far more crucial to winning this conflict. Motivation is important but it must not make us complacent. Most military hardware we saw at the Islamabad parade is useless against an elusive enemy. We shouldn’t get carried away. The most effective tools, in theory, should be possessed by a police force that performs discriminatory, intelligence-based operations, operations that are not about military pomp and pageantry. They are silent but effective, away from plumed glory.

And since this war is about an idea, use of force alone will never translate into utility of force. It must be backed by a narrative. But that’s another topic.

Let the pageantry motivate us but let us not forget that winning is about hard, banal work.

The burden of training is shared by the units deployed in peaceful parts of the country. Efforts are made to complete the strength of those units that are deployed on front-line. Secondly, this training is more for conventional warfare as the #Army can not ignore the threat emanating from our Eastern border.
The commandant that gave the idea of Azadi Parade to Gen K was probably the incumbent COAS.