Home Lightbox Without a Hitch 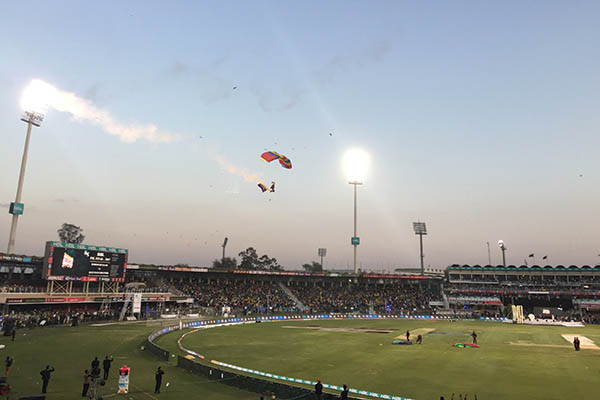 In a time of fear, cricket therapy.

Vigor, loyalty, and passion trumped fear as thousands made their way to Lahore’s Gaddafi Stadium on Sunday afternoon for the Pakistan Super League cricket final on March 5. Grasping onto every resource that could be spared, Pakistan somehow managed to pull it off.

In February, terror attacks across Pakistan, including in Lahore, claimed 130 lives. So the successful conclusion of this event, the first PSL match on home ground, would go a long way toward restoring a sense of normalcy and a fear-free return to life. In spite of the alerts and the city being in virtual lockdown with major veins constricted by law enforcement personnel, men, women, and children from all facets of life strode across the previously ailing city, brimming with hope, making what felt like a long and impossible journey to the stadium.

As traffic wardens and police officers cordoned off routes that would lead the Peshawar and Quetta teams to the stadium, on a street in Gulberg, one man on a motorcycle, children tucked under his arms, broke the nervous silence and applauded the security measures. No one fidgeted, no one complained, everyone persevered. When the teams zipped by on the Canal with their presidential escort, the march of consolidation recommenced.

The turnout at the venue was generous and encouraging. Packed with security personnel, armored vehicles, and obstacles of every conceivable design, the stadium felt oddly safe. Interactions with security personnel were roundly polite and mutually considerate, ensuring that protocol was followed as intended. No one even dared to think about the consequences of one wrong move. And it really did go off without a hitch.

It was back to the good old days and the electric atmosphere pulsing through the crowd indicated just that. Colored smoke emitted by parachutists as they circled the stadium marked the opening of the match. Thousands hooted and hollered as these men swooped down near the pitch, one after the other. The music, the fireworks, the passion, the patriotism, and, yes, the near-decade of cricket deprivation made for a moving evening.

There were gasps and groans, chants and waves, even a little light swearing with every run, boundary, and wicket. This was the rebirth of international cricket in Pakistan, and the crowd couldn’t have enough of it. They remained transfixed as decisions were reviewed and the numbers kept ticking. For the brief hours of the match, Pakistan’s existential problems were out of mind. Pakistan basked in glory, showcasing local talent and international stars side by side. If we ever had a uniting factor, it was cricket. And it was finally here.

A team won and a team bowed out. But the team that truly won was not on the field, but around it. Each parent, child, sibling, and spouse who came to the match—despite exertions from loved ones to watch from the safety of home—to be in the mix of it all won. Sunday was a night of many virtues: fervor, optimism, resilience. More than anything, though, it was a night of madness. Sheer, beautiful, madness that demonstrates how dearly we value a sport that makes us remember more than it makes us forget. The success of the PSL final reminded us of who we truly are: brave, undaunted, united.

Punjab Assembly Adjourned Till May 16