Without Fear or Favor? 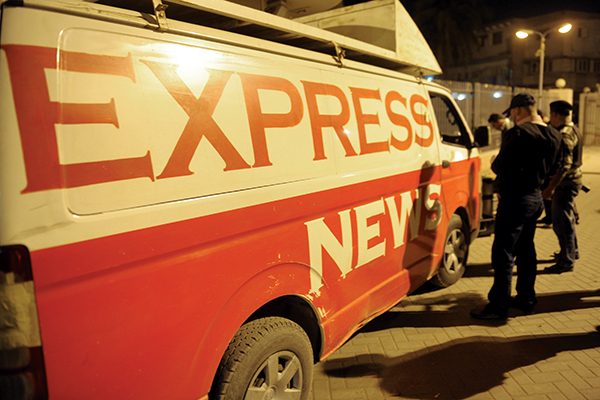 Just hours after the Tehreek-e-Taliban took credit for the Jan. 17 attack on an Express News van in Karachi, the privately-owned cable channel negotiated a truce with the militant organization—on live TV. The Taliban spokesman Ihsanullah Ihsan said the latest attack on Express News that killed three was a reaction to the channel’s “biased reporting” against his organization. The cable news channel had been warned before, he said, but had paid no heed to the warnings. Javed Chaudhry, an Express News talk-show host, spoke to Ihsan and promised bespoke coverage to the Taliban if they agreed to cease further attacks. On social media, sympathy for the channel quickly soured into scorn. But Express is blameless in this. Just recently, with his own peace initiatives having failed, Prime Minister Nawaz Sharif said everyone and anyone was free to negotiate peace with the Taliban. In the face of the state’s abject surrender to the Taliban, one can’t blame journalists for seeking protection from the only power in Pakistan that counts.

The print version of this News Gallery incorrectly identified the Taliban spokesman who spoke with Express News as Shahidullah Shahid. The error is regretted.