Witnesses on the ‘Bloodbath’ at Paris Rock Concert 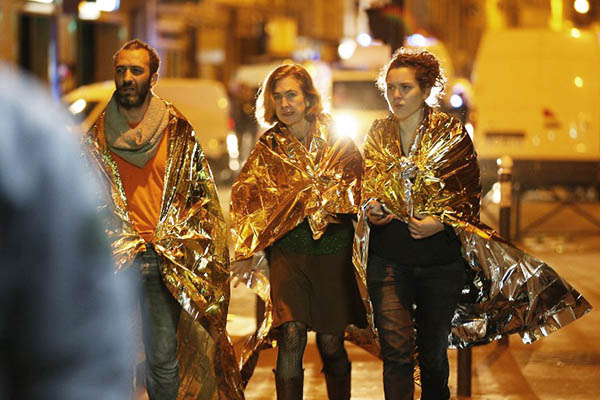 Survivors of the assault on a concert hall say terrorists fired indiscriminately on crowd.

Terrified survivors from the Paris concert hall targeted during Friday’s attacks have described running over bodies and hiding after gunmen stormed the venue and began executing rock fans with barrages of automatic gunfire.

Pierre Janaszak, a radio presenter, was sitting in the balcony with his sister and friends when they heard shots from below about one hour into the concert by U.S. rock band Eagles of Death Metal. “At first we thought it was part of the show but we quickly understood,” he told AFP. “They didn’t stop firing. There was blood everywhere, corpses everywhere. We heard screaming. Everyone was trying to flee.”

Janaszak and his friends hid in a toilet where they would spend the next two hours waiting for police to storm the building and rescue the survivors. Around 80 people are believed to have died in the assault. “They had 20 hostages, and we could hear them talking with them,” said Janaszak. “I clearly heard them say ‘It’s the fault of Hollande, it’s the fault of your president, he should not have intervened in Syria’. They also spoke about Iraq.”

Another radio reporter described the “10 horrific minutes” when the black-clothed gunmen calmly opened fire. “It was a bloodbath,” Julien Pearce, a reporter for France’s Europe 1 radio station, told CNN. “People yelled, screamed and everybody lying on the floor, and it lasted for 10 minutes, 10 minutes, 10 horrific minutes where everybody was on the floor covering their heads. We heard so many gunshots and the terrorists were very calm, very determined and they reloaded three or four times.

“People started to try to escape, to walk on people on the floor and try to find the exits, and I found an exit when the terrorists reloaded their guns. I climbed on the stage and we found an exit,” said Pearce.

The journalist said he took a teenage girl who was bleeding heavily and carried her to a taxi, telling the driver to take her to hospital. He said he saw the face of one gunman, who was probably 20 to 25 years old. “We heard people screaming—the hostages particularly—and the threats from the kidnappers shouting ‘Look at me!’” added another survivor, 34-year-old Charles. Along with around 20 others, he fled to a toilet where they pushed through the ceiling and hid in the crawl space.

But Charles refuses to be cowed by the terror he experienced. “Life goes on. We won’t give in to fear. Fuck them! I’m going to a concert on Tuesday. Keep rocking!”

But others face an agonizing wait to hear from loved ones lost during the chaos. “My friend Claire was celebrating her best friend’s birthday at the concert. We don’t have any news, the phones are going to answer machine,” said Yvan Pokossy, a 24-year-old party organizer. “I’m supposed to get engaged to her in three weeks. I don’t know if I’ll ever see her again.”

Marielle Timme hid in a bathroom for close to three hours before being rescued by police. “What scared us the most was that the last terrorist was killed just near us so we heard all the conversation and gunfire. The bombs, too. We didn’t dare open the door to the police, because we didn’t know if it was them or the terrorists.”

“There’s nothing but the sound of gunfire and carnage running through my head,” said another young woman who hid in a side room with around 25 people. “We had one chance in two of taking a bullet,” she said, shaking.