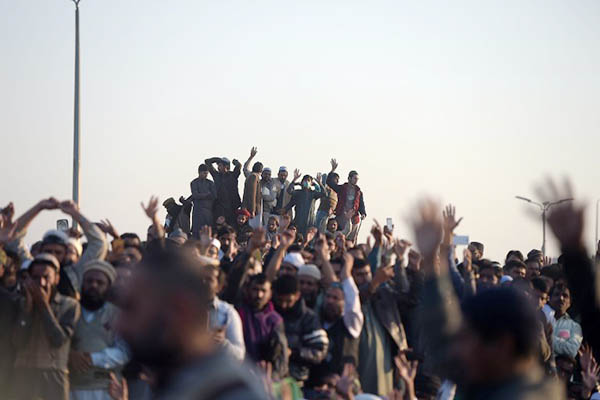 The great countrywide “dharna” of the Barelvi sect came to an end on Nov. 27, barring a few straggling groups liking the power to disrupt too much to give up easy. The Army got into the act and got Barelvi leader Khadim Hussain Rizvi to call off the siege of the state, and accept Rs 1,000 handouts from the Major-General in charge, for men whom the police had arrested and jailed. It sounded weird as the Urdu-dominated TV channels snarled at the Pakistan Muslim League (Nawaz) government for the “crime against Islam’s Prophet,” as well as failing to meet the challenge of history’s most paralyzing “dharna.”

Except a judge at the Islamabad High Court, Justice Shaukat Siddiqui. He rejected the Army’s interference in the matter, which he thought violated the details of the ruling he had given about how the government should go about removing the mullahs from the roads. This highlighted the innuendo already made by several PMLN spokesmen about how the Army was acting behind the scenes, starting with the 2014 dharna of Imran Khan and his well-funded Barelvi “cousin,” Allama Tahirul Qadri. Big money was spent then; big money was also in evidence this time too. The intelligence agencies kept mum and walked gingerly through the rubble of the state pretending not to know. And one source quoted Rizvi as saying that the Army would not harm his great dharna “because we are doing the Army’s job.” Most of what else he said about the government is too indecent to quote.

The PMLN bent and creaked under the burden of the crisis: not only the Army, which is enough to change Pakistani politicians’ minds at any time, but also the entire nation suddenly went squeamish about two synonymous English words in the legislation they thought had insulted Islam’s Prophet. From the well-known internal political crevasse of the party, Chief Minister Punjab Shahbaz Sharif sensed where the crisis was leading and called on Law Minister Zahid Hamid to resign, after which Hamid flew to Lahore to consult him about the threat from the Army and, eventually, did just that. And Shahbaz’s friend Chaudhry Nisar Ali Khan—now without his Interior portfolio—accused the current interior minister Ahsan Iqbal of “lying.” Ominously, 14 PMLN members of parliament and the provincial assembly announced they had tendered their resignations to a spiritual leader, giving him the power to decide whether they should leave the party, even as Imran Khan tweeted in favor of immediate elections.