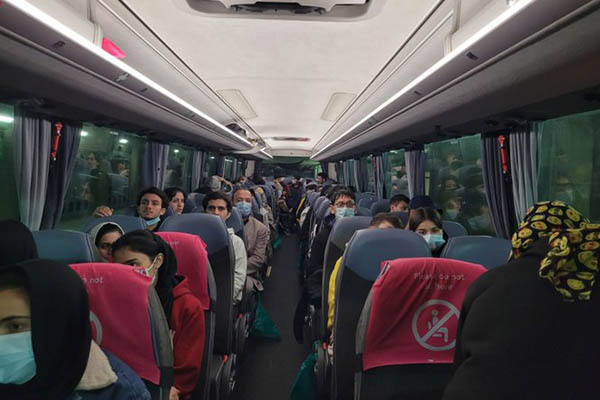 Members of Afghanistan’s girls’ youth development football squad reached Britain early on Thursday morning, ending a flight from Taliban rule in Afghanistan that commenced in August. They will now spend 10 days in coronavirus quarantine before starting new lives in Britain.

The group, comprising around 130 people, including players, coaches and their families, had been left stranded in Kabul after being unable to secure spots on evacuation flights prior to the withdrawal of the U.S. from Afghanistan. Following the intervention of Prime Minister Imran Khan, they were granted visas to Pakistan and entered the country via the Torkham border crossing at the end of August.

However, with their visas set to expire and no flights available, concerns were mounting that they could be deported back to Afghanistan, despite pledges of support by the Leeds United Football Club to sponsor and finance their integration into British society.

According to British media, the impasse ended with the aid of the Tzedek Association, a non-profit U.S. group that had previously helped the last known member of Kabul’s Jewish community leave Afghanistan. The group’s founder, Rabbi Moshe Margaretten, told journalists that he decided to approach activist Kim Kardashian-West to see if she was willing to help pay for a chartered plane from Pakistan to the U.K. for the stranded team.

“Maybe an hour later, after the Zoom call, I got a text message that Kim wants to fund the entire flight,” he said. “So thankful to God that the Afghan Female Youth National Team landed safely in London after fearing for their lives for so long. Thank you Kim Kardashian-West for funding this flight! I pray others will learn from your generosity and help high-risk Afghans at risk,” he said in a subsequent post on Twitter.

Khalida Popalzai, a former captain of the Afghanistan women’s team who has led evacuation efforts for female athletes, said she felt “so happy and so relieved” that the girls and women were out of danger. “Many of those families left their houses when the Taliban took over. Their houses were burnt down,” she said. “Some of their family members were killed or taken by Taliban. So the danger and the stress was very high, and that’s why it was very important to move fast to get them outside Afghanistan,” she added.

She also thanked Kim Kardashian-West and her SKIMS organization for donating all the funds for the flight. “My mother is a big fan of yours, and now so am I! Kim Kardashian-West is an example to others to step up to the plate and help others in their time of need,” she wrote on Twitter.

Popalzai had earlier facilitated the evacuation of members of Afghanistan’s national women’s football team to Australia, as well as the resettlement of the youth girls’ team in Portugal.