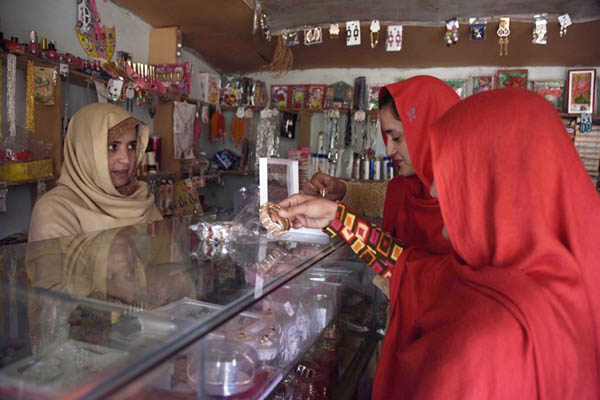 A narrow path winds through Kashmir’s Valley of Pearls toward 13 tin-roofed shops hidden in a rickety row, a women-only market that doubles as a space for those seeking help against the violence of Pakistan’s patriarchy.

The market, in a small village outside the main city of Rawalakot in a conservative corner of Pakistan-administered Kashmir, began simply as a place run by women for women. There they could buy and sell sewing supplies, visit clothing boutiques or train as beauticians—a welcome outlet for many struggling with the restraints on women in the deeply traditional Muslim area.

Social worker Nusrat Yousuf, who works with victims of domestic violence through the non-governmental organization (NGO) she heads, helped persuade a generous landlord to provide the land to set up the market in 2011. Women in the area, she says, are forbidden by their families to work in the main markets in the area’s towns and cities.

“They become frustrated when they can’t get jobs and spend their lives at home,” the 48-year-old widow tells AFP. The market, from which men were at first banned, provided a way around conservative beliefs, making women “economically strong.”

Yousuf describes it as a place “where they can visit and freely discuss all their issues—such as childbirth, menstruation, cooking, and domestic issues, and we find solutions.”

That increasingly includes how to help divorced women and victims of domestic violence lodge complaints with police and fight their cases in the courts.

Women have battled for their rights for decades in Pakistan. Hundreds are murdered each year—usually by male relatives—in so-called “honor killings” and disfiguring acid attacks are still common. Rights groups and politicians have for years called for tougher laws to tackle perpetrators of violence against women in Pakistan.

“Police were not arresting an influential man who cut off the nose of his wife three months ago,” she says, describing just one of the cases she has handled from her office in the market. “She approached us, and our NGO staged a protest against police,” Yousuf explains, adding that she then met with police officials and lodged a complaint. “Now the culprit is in police custody. We have hired a female lawyer to fight the case,” she says.

Razia Bibi, a 35-year-old mother of two whose husband divorced her five months ago, described how Yousuf is helping her navigate the courts to seek alimony from her children’s father. “I am hopeful that the verdict will be in my favor,” she says.

Yousuf says her NGO, the Pearl Rural Support Program, which brings together women’s organizations in seven local villages, is also lobbying the government for a separate desk for women at every police station, where they can speak to a female officer “more comfortably.”

Yousuf says that, originally, men were banned from entering the market. Now they can enter—but only in the company of a woman.

The market has made life easier, says customer Ayesha Bibi. “We had to travel to the main markets for such things in the past, and we needed the company of a male family member to go there,” she explains. It is also providing economic opportunity for those such as computer graduate Sara Rasheed, whose family refused her permission to work in any area dominated by men.

She convinced them to allow her to open a beauty parlor and a garment shop in the market, she says. “I am earning a good income and saving lots of money for my future and family,” she adds proudly.

Khurshid Begum, a 42-year-old widow and mother of four, opened a tailor’s shop and teaches sewing to young girls there. “My business has flourished… My income has increased,” she says.

“We are trying to make more and more women skillful in future,” Yousuf says. “I am very happy that I am achieving my goal.”