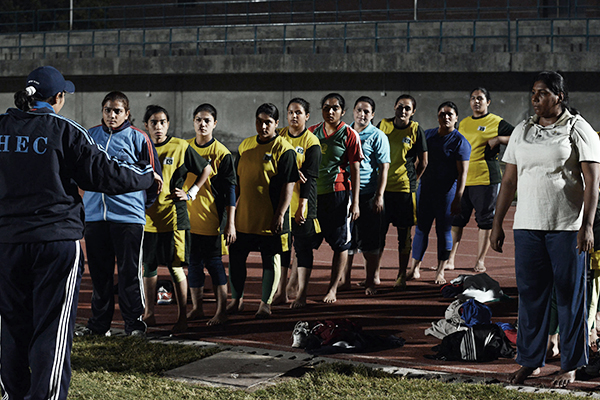 This is the first time Pakistan has fielded a women kabaddi team.

Pakistan’s women kabaddi players left for India on Saturday to participate in the sport’s world cup, which runs through Dec. 14. This is the first time that the Islamic republic has fielded an international women’s team in the tag-wrestling South Asian sport.

Traditionally seen as a man’s game, kabaddi, which involves players trying to tag an opponent before making it back to their half of the field, is popular in both Pakistani and Indian Punjab. India and Pakistan have met in two of the three men’s world cup finals held so far, with India prevailing both times. Pakistan’s 16-player women squad is determined now to succeed where their male counterparts could not.

For many of the players, this is a dream come true. “I have been sports crazy since childhood and was selected for national events in various sports many times, but I was never allowed by my family to attend a training camp outside college or university,” said Sayeeda Fareeda Khanum, 24. “When I got selected for the kabaddi team, I told my mother that I would play this sport at any cost and left home to join the camp in Lahore.” Khanum is the team’s best defender, and was excited about the matches in India. “I am going to India to make a do-or-die battle for my nation and prove that Pakistani girls can do whatever women do in other countries.”

Her colleagues share the same sentiment. “We decided to participate in this team for the sake of Pakistan, and for the sake of true patriotism,” said Sumera Zahoor, the team’s vice captain. “We have tried our level best and, by the will of God, we will succeed.”

Having decided to build the women’s team, Pakistan’s sports authorities wrote to top organizations and educational institutions, collecting a group of girls from diverse sporting backgrounds. Half already represent various other sports like athletics, weightlifting, and racket games. Zahoor, the vice captain, has a martial-arts background.

Training for the women begins with prayers and a recitation from the Quran. After chants of “Long live Pakistan” and “God is great,” they begin physical exercises before moving on to wrestling techniques. It has not been an easy task for the support staff to get the team together and direct their potential.

“All the girls come from different games, some are from athletics, some are weightlifters,” Aisha Qazi, the team’s coach, said. “These are an individual’s games but kabaddi is a team event, so there is a huge difference and it has taken me some time to teach them.” Qazi is herself a first-class cricketer and international baseball player.

Head coach Ghulam Abbas Butt said he was confident the women’s team would live up to their promise. “I hope the boys’ team will win the World Cup this time and the girls would also not disappoint in their first appearance,” he said. “I have done this training with my heart, and they followed it the same way. These were new girls and they have done whatever I asked them to do. That’s why I know that they will play well.”