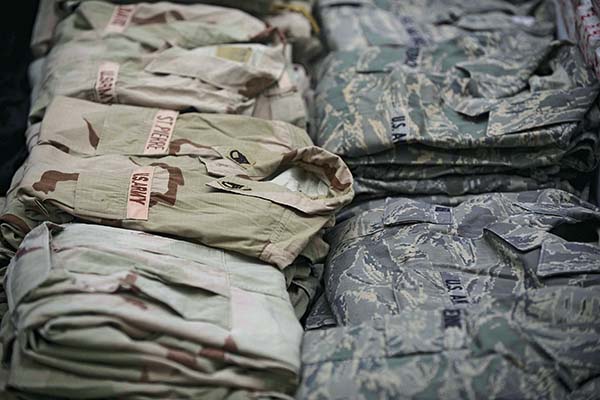 How many camos can one military have?

The U.S. military may have to clean out its closet. After a decade of proliferating camouflage designs—pixelated patterns, flowing color splotches, and even tiny globes and anchors—to distinguish one branch from another, Congress appears to have had enough.

On June 14, the House approved a measure that would require all branches of the military to share the same camouflage pattern by October 2018, and the Senate Armed Services Committee has approved a similar provision. Rep. William Enyart was inspired to put the measure forward after reading a Washington Post report last month that branches of the military have spent millions designing their own subtly unique fatigues. In the last 11 years the military has gone from two camo patterns—one for forest, the other for desert—to 10.

The Marine Corps started the sartorial arms race in 2000, when it spent $319,000 to develop a pixelated camo in woodland and desert palettes. The pixels were cool, modern, and reminiscent of digital technology, and other branches wanted the print, but couldn’t have it, because the Marines, anticipating copycats, had emblazoned tiny eagles, globes, and anchors onto their uniform. So the Army spent $3.2 million developing its own pixelated pattern, which was released in 2005 and was supposed to work in all environments, from forests to cities to deserts. It turned out that it didn’t blend in with the Afghan landscape, so they rushed to replace it again in 2010 with a more traditional splotchy pattern called MultiCam.

The Air Force, meanwhile, was finding that its new gray-blue “tiger stripe” pattern, developed for another $3.2 million, didn’t work in Afghanistan either and switched to using the Army’s MultiCam. The next year the Navy came out with its own patterns, including a blue-and-gray uniform for ships and a desert pattern that the Marines complained was too similar to their own, despite it having a tiny USS Constitution printed on it instead of the Marines’ globe.

The military has had a mixed reaction to the threatened streamlining. Navy Secretary Ray Mabus has come out in favor of consolidating patterns, quipping that the Navy’s own water-colored camo isn’t very well suited to the Navy—“the great camouflage it gives is if you fall overboard,” he said.

The trendsetting Marines, on the other hand, are not happy. “It’s part of our Corps’ identity,” Marine Corps Sgt. Maj. Micheal P. Barrett said in a written statement. “Where we walk or sail, people are safer—unless you screw with us!”