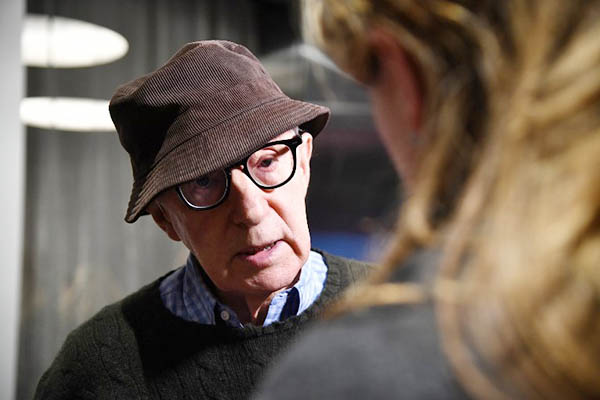 Woody Allen faced widening isolation on Friday over allegations that he molested his daughter more than 25 years ago, after Colin Firth joined the list of actors saying he would not work with the director again.

Allen’s estranged, adopted daughter Dylan Farrow has revived claims that he sexually assaulted her as a seven-year-old in 1992, asking the world to finally believe her as the sexual harassment watershed convulses America. On Thursday, Farrow aired her first television interview as 82-year-old Allen hit back, accusing his ex-lover’s family of “cynically” exploiting the Time’s Up movement to repeat “discredited” allegations.

After the interview broadcast, Oscar-winning Firth became the latest actor and arguably the most high profile to publicly rebuke Allen, telling the Guardian newspaper: “I wouldn’t work with him again.”

Firth starred in Allen’s 2014 film Magic in the Moonlight, shot before Farrow detailed the alleged abuse for the first time in her own words in an open letter published on a New York Times blog in 2014. Her claim first surfaced in the midst of her parents’ bitter split, when Allen left the actress Mia Farrow for her adoptive daughter from a previous marriage, Soon-Yi Previn, 21 years old at the time.

Allen—the director of more than 50 movies, a four-times Oscar winner and showered with awards in Europe—has always denied the allegations, which have never been proven. He continues to enjoy a glittering career and remains married to Soon-Yi. But the sexual harassment firestorm that has brought down Hollywood titans such as Harvey Weinstein has seen many reassess Farrow’s claims and has fueled a growing backlash against Allen.

In recent weeks, actresses including Greta Gerwig, Rebecca Hall, Ellen Page and Mira Sorvino, have announced they regret working with Allen. Oscar-winner Natalie Portman also told Oprah Winfrey in a televised interview with other actresses that she believed Farrow.

“He’s lying and he’s been lying for so long,” Farrow told CBS This Morning in the interview that aired Thursday, breaking down into tears when watching a clip of Allen denying the alleged assault.

Now a 32-year-old married mother of a young girl, Farrow said in retrospect she wished the case had gone to trial. “Honestly, yes. I do wish that they had,” she told CBS. A Connecticut state prosecutor at the time found probable cause to charge Allen but thought Farrow too fragile to face a celebrity trial.

Farrow says Allen took her to a small attic crawl space, instructed her to lay down on her stomach and play with her brother’s toy train, while he sat behind in the doorway and touched her private parts. “He was always touching me, cuddling me and if I ever said, you know, like I want to go off by myself, he wouldn’t let me,” she told CBS. “He often asked me to get into bed with him when he had only his underwear on and sometimes when only I had my underwear on,” she added.

Allen said the alleged molestation had been “thoroughly investigated” by the Child Sexual Abuse Clinic of the Yale-New Haven Hospital and New York State Child Welfare and that both “concluded that no molestation had ever taken place.”

“Instead, they found it likely a vulnerable child had been coached to tell the story by her angry mother during a contentious breakup,” he said. “What I don’t understand is how is this crazy story of me being brainwashed and coached more believable than what I’m saying about being sexually assaulted by my father?” hit back Farrow.

The New York judge who presided over the 1994 custody battle between Allen and Mia Farrow ruled that the allegations were inconclusive, but at the same time lambasted the director as “self-absorbed, untrustworthy and insensitive.”

Hall and the actor Timothee Chalamet, who appear in Allen’s upcoming movie A Rainy Day in New York, have announced that they will donate their salaries from the film to charities including the Time’s Up movement. Selena Gomez, who stars in the same movie, has already reportedly donated a fee larger than her salary to charity.

Farrow, who has called out celebrities who have starred in Allen’s films, denied to CBS that she was angry with them. Instead she expressed hope that they could “maybe hold themselves accountable to how they have perpetuated this culture of—of silence in their industry.”