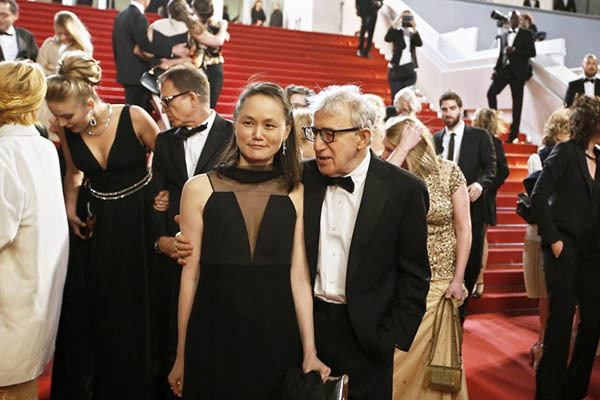 Hollywood director claims the 35-year age difference between him and his wife has helped their relationship.

Acclaimed American film director Woody Allen has given a rare interview and made even rarer remarks about his controversial marriage to the adopted daughter of his former girlfriend.

“I’m 35 years older and somehow, through no fault of mine or hers, the dynamic worked,” he told National Public Radio of his wife Soon-Yi, calling him “paternal” in their relationship. “I started the relationship with her and I thought it would just be a fling,” he said. “Then we started going together, then we started living together and we were enjoying it. And the age difference didn’t seem to matter. It seemed to work in our favor.”

Allen, who will celebrate his 80th birthday in December, said he had “lucked out” with his third wife. “I’ve been married now for 20 years, and it’s been good. I think that was probably the odd factor that I’m so much older than the girl I married,” he said.

“I was paternal,” Allen said. “She deferred to me, and I was happy to give her an enormous amount of decision-making just as a gift and let her take charge of so many things.”

Allen was previously in a relationship with American actress and activist Mia Farrow, who starred in 13 of his films. The couple separated when Farrow found out about his affair with Soon-Yi, whom she adopted with ex-husband, the conductor Andre Previn. Allen married Soon-Yi in 1997.

The famed director also looked back on his life, calling himself “lazy and an imperfectionist.”

“Filmmaking is not [the] end-all be-all of my existence. Another shortcoming is that I don’t have the intellect or the depth or the natural gift. The greatness is not in me,” he said.

Allen has won four Oscars and a lifetime achievement award at Cannes, the world’s top film festival, in 2002. He has produced an average of one film a year since 1965. He repeated his long-standing denial of accusations that he molested Dylan Farrow, his adoptive daughter with Farrow, and said scandals in his private life had not impacted his fans.

“I always had a small audience. People did not come in great abundance, and they still don’t, and I’ve maintained the same audience over the years,” he said. “If the reviews are bad, they don’t come. If the reviews are good, they probably come,” he added, saying he did not believe that his private life had influenced his films. His latest film, Irrational Man, is currently at the cinema.