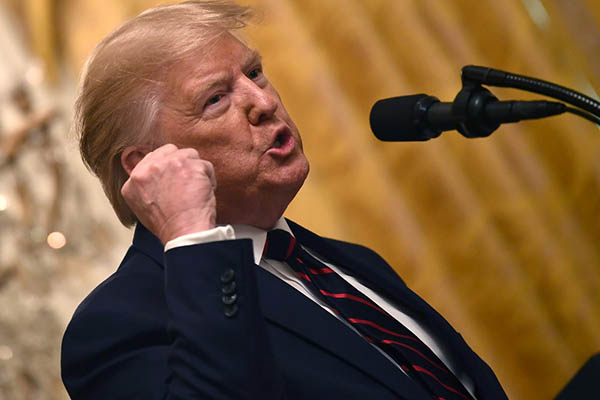 If the U.S. president is re-elected for a second term, isolationist nationalism might sweep the globe

U.S. President Donald Trump may look more and more set for an exit as he struggles to cope with the coronavirus pandemic, but the coming debates against Democrat rival Joe Biden will emphasize even more the currently confused political scene in the United States.

There is an extraordinary lack of impressive leadership among the Democrats. Biden is simply not good enough to make capital out of Trump’s blundering style. The Democrat voter may hate Trump but he is acutely aware of an inarticulate Biden. Democrats are like the Labour Party in the U.K., which has simply wilted on the bough.

On the other hand, Trump has provided the bombast that the American rightwing—and rightwings all over the world—love to hear. His voters like what he has done in his first term. He has brought America home to cut down the expensive military deployment of the past. They hate foreign policy expenses; what they need instead is more jobs back home. They want him to get out of the Middle East and Afghanistan; and what he has done so far in this connection has gone down well with everyone.

His treatment of NATO has actually paid off and the member states have now agreed to pay up for the region’s defense. Will America become unpopular in Europe for what Trump has done? No, because Europe itself is throwing up leaders who resemble Trump in many ways, as manifested in their attitude toward international refugees. Some, like U.K.’s Boris Johnson, have even started looking like him.

America will love getting out of Afghanistan and Trump will be garlanded for that considering this will save America a lot of money and help retrieve jobs that Americans were losing back home. His China policy has been accepted as “normal” by both sides of the political divide in America; and in Europe, which seems more and more inclined to oppose China at the global level.

Trump’s India policy as a part of his anti-China strategy has gone down well with India where Prime Minister Modi tends to manifest instincts—through anti-Muslim laws—similar to what Trump is doing against the Hispanic migration from South America. Many leaders appearing on the world scene resemble him but not always on his right side. Modi is backed by a majority of Indian voters and is Trump’s ally; so is Erdogan popular in Turkey, but he is among his rivals. Yet what Erdogan will end up doing in the Middle East will benefit Trump.

Trump turned against the Western powers’ Iran policy allowing it to gradually give up its nuclear dreams. But Trump has pulled it down without the E.U. leaders doing much in the way of opposition. Trump’s weapon is sanctions that the world wants to avoid although the economic power that he leverages came from America’s past multilateralism. He has achieved something in the Middle East that no American leader could ever dream of doing. He has got the Arabs to recognize Israel as their friend and to openly declare their opposition to the non-Arab members of the Islamic Summit 1974, Turkey and Iran.

India has overturned its Iran policy and, anticipating the big change, has gotten together with the new friends of Israel, which is bound to hurt Pakistan and its repatriated dollars. Trump’s anti-China policy has attracted the common man in India to him and has made China’s friend Pakistan feel besieged in the region. Pakistan, attracted to Turkey’s anti-Trump President Erdogan, is not aware how much he is like Trump. Threatened by China’s activism in the South China Sea, many leaders not given to manifesting Trump-like qualities have gathered around him to challenge China in their region.

The world has thrown up a certain kind of rightwing leadership in the first quarter of the 21st century: inward looking and hostile to the multilateralism of the 20th century. But not all Trump-like leaders are going to succeed economically; which means that there will be an anti-Trump trend in the future but not before the world has shrunk back into isolationist nationalism with a lot of negative economic fallout.

Nature too has favored Trump and his isolationist charisma by inflicting on the world its first real pandemic. Whether a country likes it or not, the trend is to cut off normal contact and get introverted. The world economy is bound to react negatively after the developed economies have spent most of their savings on their sick populations. The negative effect of it will be on the expats that the developed world had needed in the past but may now see as cultural trespassers.