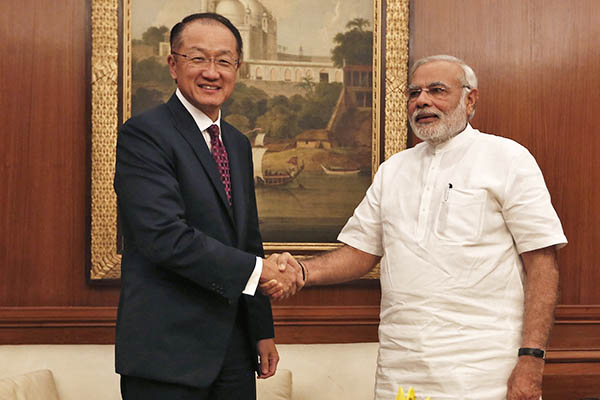 President of global body says Indian P.M. Modi has impressed him with his ‘comprehensive and extremely ambitious’ vision.

The World Bank on Wednesday offered India up to $18 billion in financial support over the next three years while lavishly praising new rightwing Prime Minister Narendra Modi’s “ambitious vision” for the country.

Speaking at the end of a three-day visit to India, World Bank president Jim Yong Kim told reporters he was hugely impressed with Modi’s “comprehensive and extremely ambitious vision for the country.”

“I am more optimistic leaving [about India’s prospects] than when I arrived,” Kim said following talks with Modi and Finance Minister Arun Jaitley to discuss the new government’s development priorities. Modi, 63, “has an extreme sense of urgency,” Kim said, as he outlined an offer to India of “financial support worth $15 billion to $18 billion over the next three years” to help lift hundreds of millions of Indians out of poverty.

India is already the Bank’s largest cumulative borrower. “His [Modi’s] intention is to grow this economy quickly, grow the number of jobs quickly and demonstrate to the Indian people you can do things at scale with great speed,” Kim said.

As part of Modi’s anti-poverty drive, Kim strongly urged him not to block a landmark world trade deal that would make it easier for goods to cross borders and inject an estimated $1 billion into the global economy. India has been threatening not to ratify the World Trade Organization (WTO) agreement reached last year in Bali unless it gets assurances that it can help its poor citizens with food subsidies.

“Freer trade and more trade have been extremely important for poor nations,” Kim said as the July 31 deadline for acceptance of the treaty by all 160 WTO members loomed. While Modi is pro-business, his government says the trade facilitation agreement or TFA is biased in favor of wealthier nations which assert that food subsidies lead to distortions in global trade.

Kim said Modi was especially keen for progress in education and in energy development with 300 million of energy-starved India’s 1.25-billion population still without electricity, according to the Bank. “We are going to have to run as fast as we have ever run to keep up with him,” said Kim.

Kim’s lavish praise came despite criticism by some economists of the government’s budget in early July that they said failed to take sufficient steps to reform the still highly regulated inward-looking economy. Kim added he was open to India’s call for reforms to the Bank’s structure to better reflect the growing clout of emerging nations.

“No one can doubt the importance of middle-income BRICS [Brazil, Russia, India, China and South Africa] countries,” Kim said, adding the bank had already taken steps to mirror new power equations and more discussions would be held next year. “The organization has to reflect the new reality, we will continue to make changes,” he said.

Kim’s statements follows the five-nation BRICS bloc’s establishment this month of a new multilateral infrastructure development bank to rival the World Bank and challenge U.S.-led dominance of the global economy.