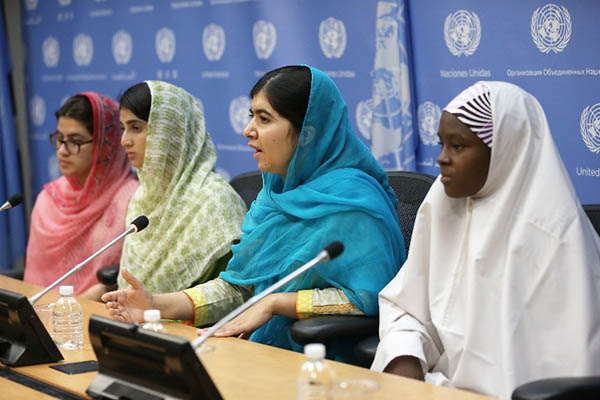 Nobel laureate urges global leaders to see imagine their own children’s suffering when looking at the plight of Syrian children.

Teenaged Nobel laureate Malala Yousafzai appealed Friday for leaders to do more on Syria, saying that the drowning of a toddler showed the world had “lost humanity.”

The 18-year-old Pakistani, who was shot by the Taliban for defiantly going to school, said she was so upset by abuses of girls at the hands of extremists in Syria and Iraq that she has stopped watching the news. But she saw and remained haunted by the picture of Aylan Kurdi, the Syrian toddler whose body washed up on a Turkish beach in an image that became emblematic of the risky exodus of refugees seeking safety in Europe.

“We lost humanity on that day when… nowhere a child is welcomed,” she told reporters at the United Nations. “It is important that people open their hearts and people open their lands to people who are now needing more support and who need the right to live,” she said.

Yousafzai appealed to world leaders to imagine their own children suffering the abuses meted out by the Islamic State extremists, who have sexually enslaved girls from minority groups.

“The first thing is that the world leaders need to take all these issues more seriously,” said Yousafzai, who brought with her four girls including a Syrian refugee. “They should think about their own children.”

Yousafzai came to New York for the adoption of a new U.N. development agenda, which aims to end extreme poverty in 15 years. She met on the sidelines with German Chancellor Angela Merkel, who has emerged as the leading European force in support of welcoming refugees.

Yousafzai has not returned to Pakistan for three years amid concerns for her safety, instead studying in Birmingham, England. She said she took two days off to come to the United Nations.

“I never miss a school day unless it’s for a good cause and it really brings change,” she said.