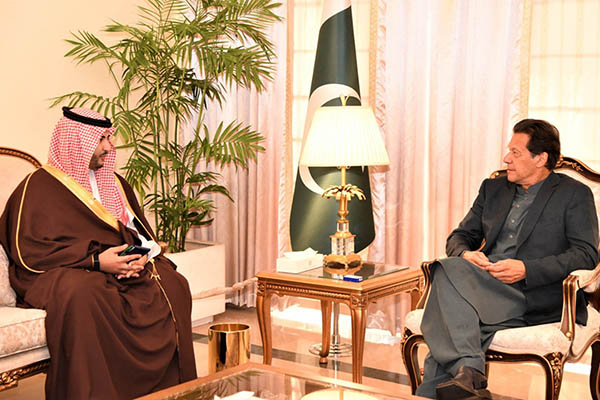 The Muslim world must especially work to prevent ongoing atrocities against Muslims in India, Khan added to Saudi Arabia Deputy Minister for Defense Prince Khalid bin Salman bin Abdulaziz during a meeting in Islamabad. Saudi Arabia’s role as an important member of the Organization for Islamic Cooperation was also discussed as part of this goal.

Khan stressed to Prince Khalid that the Indian leadership’s belligerent rhetoric and aggressive actions posed a great threat to regional peace and security. He said India’s discriminatory Citizenship Amendment Act and the National Register of Citizens underscored that New Delhi was engaged in systematic efforts to discriminate against, marginalize and disenfranchise minorities, particularly Muslims.

Referring to last week’s clashes in New Delhi between predominately Muslim and Hindu groups, which resulted in over 30 deaths, Khan said the “targeted killings” of Muslims in the Indian capital, and desecration of their places of worship, was a matter of grave concern not only for the Muslim world but also the international community. He underlined that the RSS-inspired Bharatiya Janata Party government’s “Hindutva” ideology was working on two fronts: squeezing Muslim Kashmiris in India-held Kashmir, while also targeting minorities in the rest of the country.

The prime minister hailed the “special significance” of ties between Saudi Arabia and Pakistan, noting they were based on close fraternal ties, historic links, and support at the grassroots level.

Recalling Prince Mohammad bin Salman’s visit to Pakistan in 2019, Khan thanked the Gulf kingdom for its strong economic support to the country, particularly at a time of great economic challenges. He also appreciated the growing economic ties between the two countries and the Saudi commitment for investments in diverse sectors.

During the meeting, the Saudi deputy minister for defense conveyed cordial greetings of the Saudi leadership to the prime minister. He also forwarded their deep appreciation for the role being played by Pakistan for regional peace and stability, including in the Middle East.