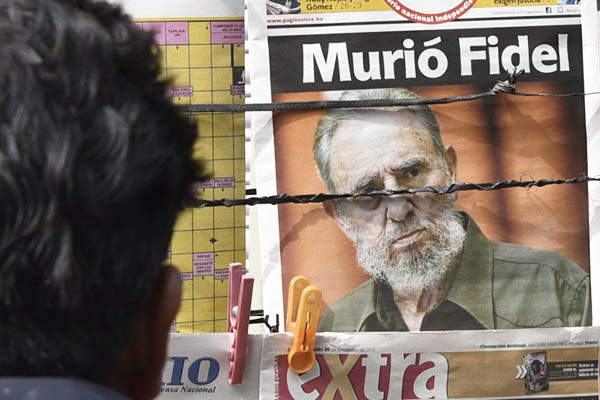 The death of Cuba’s Fidel Castro prompted reaction across the spectrum on Saturday with some world leaders describing him as a friend and ally, while rights groups recalled his repression of basic freedoms.

Here are some responses to the death of the 90-year-old Cold War icon, whose life was defined by his resistance to the capitalist United States.

“History will record and judge the enormous impact of this singular figure on the people and world around him,” said the U.S. president, who made a landmark visit to Cuba in March after diplomatic ties between the two nations were restored.

The U.S. president-elect called Castro a “brutal dictator,” but made no overt mention of earlier threats to roll back a historic rapprochement. “Fidel Castro’s legacy is one of firing squads, theft, unimaginable suffering, poverty and the denial of fundamental human rights,” Trump said in a statement.

“The name of this distinguished statesman is rightly considered the symbol of an era in modern world history,” the Russian president said. “Fidel Castro was a sincere and reliable friend of Russia.”

China’s president hailed Castro in a message read out on state television. “The Chinese people have lost a good and true comrade,” he said. “Comrade Castro will live forever.”

The Venezuelan president, Cuba’s main ally in the region, said on Twitter: “It is up to us to continue his legacy and carry his flag of independence.”

“The great leader Fidel Castro led his people’s and his country’s struggle against imperialism and hegemony for decades,” said the Syrian president, hailing Castro’s “legendary resistance” to the U.S. embargo against Cuba.

Syria has faced a barrage of U.S. and E.U. sanctions over its brutal civil war.

The Catholic world leader sent a message saying he was “praying to the Lord that he may rest in peace.”

“Under former president Castro, Cuba made progress in the areas of education, literacy and health,” the U.N. secretary-general told journalists.

“Fidel stood up and strengthened his country during the harshest American blockade, when there was colossal pressure on him and he still took his country out of this blockade to a path of independent development,” Interfax news agency quoted the former Soviet leader as saying.

The South African president gave one of the warmest tributes, saying: “President Castro identified with our struggle against apartheid. He inspired the Cuban people to join us in our own struggle. As a way of paying homage to the memory of President Castro, the strong bonds of solidarity, cooperation and friendship that exist between South Africa and Cuba must be maintained and nurtured.”

Castro “made distinguished contributions to accomplishing the cause of independence against imperialism,” North Korean leader Kim Jong-Un said in a message posted by the country’s official news agency. He “established the socialist system where the people became the genuine masters for the first time in the Western Hemisphere.”

Castro embodied Cuba’s revolution in both its “hopes” and its later “disappointments,” the French president said in a statement.

India’s prime minister sent his “deepest condolences” to Cuba. “Fidel Castro was one of the most iconic personalities of the 20th century. India mourns the loss of a great friend,” Modi tweeted.

Castro was “a unique figure who fought against colonialism and exploitation” and was “a model of the fight for independence by oppressed nations,” said Iran’s foreign minister, the Fars news agency reported.

Brazil’s once hugely popular leftist president Lula mourned Castro’s death as equivalent to losing a brother. “His spirit of combativeness and solidarity nourished dreams of liberty, sovereignty and equality,” he said.

For the Philippines’ president, Castro distinguished himself by “standing up against the West and imperialism.”

Vietnam’s official Communist news agency hailed Castro as “a great leader” who was “the shining reflection of the independence and revolutionary movements of countries in Latin America and around the world.”

“He was a fierce defender … of justice in the world,” said the Palestinian president.

The Argentine football legend lamented Castro’s death saying, “I’m terribly sad as he was like a second father.”

“Castro’s achievements in improving access to public services for millions of Cubans were tempered by a systemic repression of basic freedoms,” Amnesty said.