Home Latest News ‘World Saw Who is the Terrorist’

‘World Saw Who is the Terrorist’ 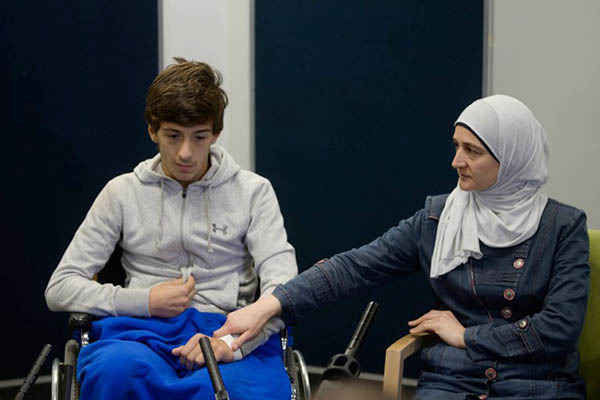 Salwa Mustafa lost a husband and son to a white supremacist gunman in the Al Noor Mosque, but the Syrian refugee had a defiant message for the world a week after the tragedy.

“If they think that they are destroying us, they are wrong,” Mustafa told a press conference as she held the hand of her remaining son, who was shot in the leg during the onslaught. “What’s happened makes us stronger, because we are not terrorists,” she said. “People say that… Muslims are terrorists. The whole world saw who is the terrorist,” she said. “Muslims are people of peace and love, not terrorists.” She added: “And I hope the whole world now can understand the real Islam, the reality of Islam.”

Khalid Mustafa and his 15-year-old son Hamza were the first of 50 victims in the shootings at two mosques in the southern New Zealand city to be buried on Wednesday. The family arrived in New Zealand last year as refugees from the conflict in Syria, only to find themselves victims of violence in a land they thought was safe.

The accused gunman, Australian Brenton Tarrant, recounted his motivation in a rambling manifesto in which he spoke of wanting to battle “Muslim invaders.”

In Friday’s emotional press conference, Mustafa and her surviving son Zaid, 13, thanked New Zealanders for organizing a national call to prayer on Friday.

Zaid, who sat in a wheelchair with a blanket draped over his injured leg, said he was devastated to lose his father and brother. “I’m feeling like if I died and my father and brother is still alive, it will be better,” he said, wiping tears from his eyes. But he vowed to keep living for them. “I’m feeling like if I am just sitting around sad all the time, it doesn’t make sense,” he added. “I am thinking to complete my life like there is no-one dead.”

Zaid added that he would return to Al Noor for prayers once it was reopened and he had recovered from his wounds. “It means so much, to thank the God for everything that happened,” he said.