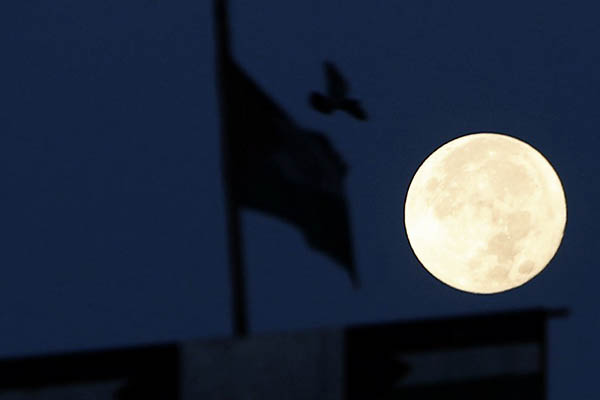 ‘Extra-Supermoon’ was closest satellite has been to Earth since 1948—a distance of 356,509 kilometers.

Skygazers took to high-rise buildings, tourist landmarks and beaches worldwide on Monday to catch a glimpse of the closest “supermoon” to Earth in almost seven decades.

The unusually big and bright moon happens when the Earth’s satellite rock is full at the same time as, or very near, perigee—its closest point to our planet on its monthly ellipsis-shaped orbit. At a distance of 356,509 kilometers, this is the closest it has been to Earth since 1948, creating what NASA described as “an extra-supermoon.”

The phenomenon was visible first in Asia, sending astronomy enthusiasts and photographers flocking to the best viewing spots, hoping the chronic pollution that blights many of the region’s cities would not spoil the fun.

Sydney’s eastern Bronte suburb became an unexpected magnet as thousands of people armed with picnic mats and cameras packed its small beach after a Facebook invite went viral. Loud cheers went up among the crowd as the moon made brief appearances between heavy, gray clouds before disappearing.

“It’s really nice,” Aidan Millar-Powell told AFP of the festive community atmosphere at the beach. “People don’t usually come together like this in Sydney for a natural phenomenon.”

Tourists, office workers and couples crowded the Hong Kong waterfront as the supersized moon rose over the skyscrapers of the financial hub, while in the Chinese capital Beijing the moon climbed spectacularly over the city’s skyline.

The supermoon was visible across much of India although residents of New Delhi, the world’s most polluted capital, struggled to see it clearly through the toxic smog that has been shrouding the city in recent weeks.

In Thailand, astrologers were variously predicting the supermoon would bring disaster or great fortune.

The supermoon means a stronger high tide, something that gets surfers giddy with excitement, not only at the prospect of riding bigger waves, but doing so at night. In Florida, tides were unusually high and flooding was reported along some beachside streets near Miami and Fort Lauderdale.

NASA published a photo of the moon appearing as a giant orange orb behind Russia’s Soyuz rocket at the Baikonur Cosmodrome launch pad in Kazakhstan, ready to propel a Russian cosmonaut, a European and an American astronaut to the International Space Station later this week. “Supermoon adorns our rocket,” tweeted Peggy Whitson, the NASA astronaut who will be on that flight. “Incredible perspective of spaceflight.”

Astronomers say it can be hard to notice that the moon appears brighter than usual. Once it is high in the sky, it can also be hard to tell it is larger. To get the best view, Pascal Descamps of the Paris Observatory advised choosing somewhere with a well-known landmark in the foreground for comparison.

Supermoons are actually quite common—there is one every 14 months on average. “But some supermoons are more super than others,” said Descamps.

After Asia it was the Middle East, Africa, Europe then North and South America’s turn to peer upwards, with eager moongazers on all continents heading to popular landmarks to see the supermoon up close—with mixed results.

In Athens, the hundreds gathered at the ancient Acropolis were treated to the sight of the massive orb rising between the monument’s famous columns, bathing the site in its glow. But thick clouds spoiled the show in several European capitals including London, Paris, Berlin and Rome.

Amateur photographers took up positions on London’s Waterloo Bridge hoping to see the moon rise above St. Paul’s Cathedral, but cloud had blanketed the sky all day and mobile apps were the only way to track the moon’s progress.

In Poland, the great rivalry between Warsaw and the old royal capital Krakow reared its head as heavy clouds thwarted moongazers in the former. But in Krakow, further south, the massive moon rose victoriously above the clouds. “I think the moon is more golden than usual—it doesn’t have the usual cold silver color,” said Roman Kwiatkowski, a Krakow psychotherapist making use of his large balcony to enjoy the spectacle.

Parts of east Africa also had an excellent view, from Nairobi to Dar es Salaam. Johannesburg got a storm instead, with one disgruntled Twitter user, @Runningflyhalf, renaming the phenomenon “supercloud.”

But in Cape Town, thousands of people were rewarded for making the hour-long trudge up Lion’s Head Mountain with the sight of the huge moon reflecting off the glimmering bay below. “I think it’s well worth waiting another 34 years to see it,” tourist guide Leslie Edgar, 30, told AFP. “I will do it again. It was spectacular.”