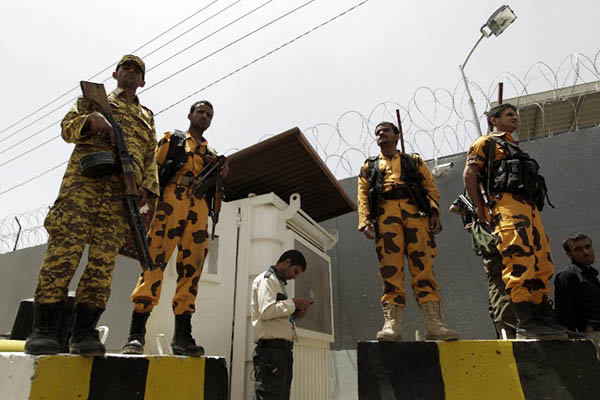 The U.N. Security Council vote came after Iran, which is accused of backing the rebels, proposed a ceasefire followed by foreign-mediated talks.

The Houthi revolt has forced President Abedrabbo Mansour Hadi to flee the impoverished Arab state and threatens to provoke a humanitarian disaster. The conflict has also further heightened tensions in the broader Middle East, with Saudi Arabia accusing Iran of fomenting the rebellion.

A Saudi-led coalition of Sunni-led states has launched airstrikes against the Shia rebels, and the civilian death toll is mounting. The U.N. Security Council responded by slapping an arms embargo on the Houthis and demanding their fighters withdraw from the capital Sanaa.

Separately, the United States demanded that Iran obey the embargo and added two top figures in the rebellion to its sanctions blacklist.

Iran, meanwhile, was working on its own plan to end the conflict, proposing a negotiated peace plan that would lead to a power-sharing government.

Saudi Arabia, which is determined to punish the Shia rebels on its borders for driving its ally from Sanaa, will give that short shrift. Saudi spokesman Brigadier General Ahmed al-Assiri told reporters the U.N. resolution shows the world supports the Saudi-led intervention.

“The United Nations vote today was a victory for the Yemen citizens before anyone else,” he said, adding the Council “sees the dangers in Yemen.”

The U.N. Security Council resolution was the first formal action by the body since the start of Saudi airstrikes on March 26. Iran’s ally Russia abstained in the vote, but did not veto it, allowing the other 14 members of the council to pass the resolution.

Tehran’s Shia government has condemned the Saudi-led strikes. Iranian Foreign Minister Mohammad Javad Zarif, addressing reporters in Madrid, said world powers should instead back Tehran’s peace plan. “I proposed a ceasefire followed by all inclusive Yemeni dialogue that is facilitated by others,” he said. This could lead, he argued, “to the formation of a government in Yemen that represents a broadly based community.”

The Houthis, drawn from Yemen’s Shia Zaidi minority, stormed Sanaa in September 2014, sweeping south from their highland stronghold. Undaunted by the Saudi bombardment, they have since seized swathes of the country, bringing intense fighting to the port city of Aden.

The U.N. resolution puts Houthi leader Abdulmalik al-Houthi and ex-president Ali Abdullah Saleh’s eldest son, Ahmed, on a sanctions list. They are now under a global travel ban and member states are required to freeze any assets.

The Houthis have allied with troops still loyal to Saleh, who was forced from power in 2012 following a year of nationwide protests.

Russia had said both sides should mark a pause in fighting for humanitarian reasons, but the final resolution did not include such a demand. Instead, it instructed U.N. Secretary General Ban Ki-moon to intensify efforts to negotiate a ceasefire, without criticizing Saudi action.

Tehran strongly denies Saudi claims that it has armed the Houthis, and Yemen was already one of the world’s most heavily armed societies.

Hadi, who has taken refuge in Riyadh, is still considered the legitimate head of state by the United Nations.

U.N. rights chief Zeid Ra’ad Al Hussein has warned that attacks on hospitals and on civilians unconnected to the fighting were war crimes. “Any suspected breach of international law must be urgently investigated,” he said.

Before the latest chaos, Yemen had been a U.S. ally in the fight against Al Qaeda, allowing Washington to carry out drone strikes. U.S. Special Forces have withdrawn from the country since the government fell, but strikes continue even as Al Qaeda and the Houthis clash.

Al Qaeda in the Arabian Peninsula said its ideological leader Ibrahim al-Rubaish had been killed in a “crusader” drone strike on Monday. Rubaish spent several years in the U.S. military prison in Guantanamo and has become a key target since he returned to the battlefield in Yemen.

In Washington, a senior U.S. official refused to comment on the strike, but confirmed that the U.S. has “capabilities postured in the area.”

“As we have in the past, we will take action to disrupt continuing, imminent threats to the United States and our citizens,” he said.

Separately, a U.S. official said Tuesday that hundreds of American citizens and their families have fled Yemen on foreign ships, joining an exodus of terrified people fleeing the conflict. Those escaping the violence have been brought to safety on board Indian, Korean and Russian ships sailing from Yemen across a narrow channel of the Red Sea, only 30 kilometers wide, to Djibouti in the Horn of Africa.