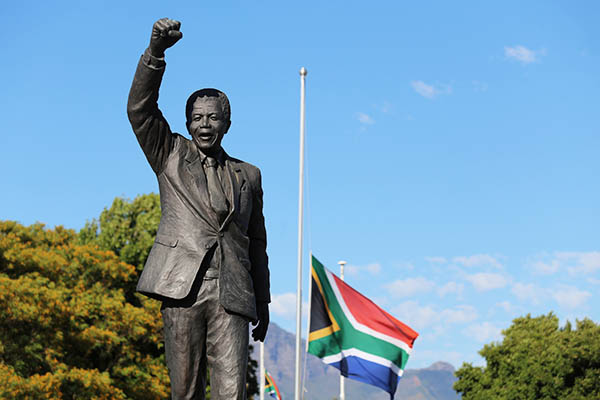 Close to 100 world leaders were among 80,000 people expected to cram into the venue in Soweto—the crucible of Mandela’s anti-apartheid struggle—to bid farewell to a man whose life story earned rare, universal respect.

Five hours before the memorial began, large crowds had already gathered in a light drizzle, hoping for one of the first-comer tickets.

Wrapped in the South African flags or yellow-green colored shawls printed with the slogan “Mandela Forever,” they danced and jogged toward the stadium entrance, some singing in Zulu: “Mandela is not sleeping, just kneeling.”

Thousands more were boarding free trains from central Johannesburg, mixing excitedly together on the platform and in the compartments—men and women of all ages and races. “I am going to the memorial to be closer to the national mood, to come out of my bubble,” said Afrikaans speaker Marcel Boezaart, 26.

News of Mandela’s death at his home in Johannesburg on Thursday resonated around the world, triggering a wave of loving admiration from political and religious leaders, some of whom agree on little else.

The presidents of the United States and Cuba are among those who will share the memorial stage, pausing rivalries that date back to the Cold War to pay tribute as millions around the world look on. The Indian and Brazilian presidents will also deliver eulogies on Tuesday, reflecting the extraordinary global reach, popularity and influence of one of the 20th century’s towering political figures. As well as Obama and three previous occupants of the White House, British Prime Minister David Cameron, French President Francois Hollande, Pakistan President Mamnoon Hussain, and Afghan President Hamid Karzai were all on the guest list.

The event is part of an extended state funeral that will culminate in the prisoner-turned-president’s burial on Sunday in the rural village of Qunu where he spent his early childhood. Some 11,000 soldiers have been deployed as part of a massive security operation to ensure order during the memoriam period.

Although Mandela had been critically ill for months, the announcement of his death was a body blow for this recently reborn nation. He had been out of public life for more than a decade, but South Africans looked to his unassailable moral authority as a comforting constant in a time of uncertain social and economic change.

On the eve of the memorial Nobel laureate Desmond Tutu described Mandela as a “magician” who conjured a united nation out of a country teetering on the brink of civil war. “Everybody was saying we would go up in flames,” he said. “He really was like a magician with a magic wand, turning us into this glorious, multi-colored rainbow people.”

A single candle was lit Monday in Mandela’s tiny prison cell on Robben Island, where he spent the harshest of his 27 years in apartheid jails, before emerging to lead his country out of the shadow of apartheid into a multi-racial democracy.

On Monday, his eldest daughter Makaziwe Mandela told how her father spent a “wonderful” week surrounded by family before he died. “The children were there, the grandchildren were there, Graca was there, so we are always around him, even at the last moment,” she told the BBC.

Ahead of the burial in Qunu, Mandela’s body will lie in state for three days from Wednesday in the amphitheater of the Union Buildings in Pretoria where he was sworn in as president in 1994. Each morning, his coffin will be borne through the streets of the capital in a funeral cortege, to give as many people as possible the chance to pay their final respects.

Parliament met for a special tribute session on Monday, with M.P.s carrying single red roses as they entered the assembly building, which was flanked by giant portraits of Mandela in tribal dress and as an elder statesman. Opposition leader Helen Zille said every politician had a duty to carry forward Mandela’s ideals of justice and equality for all. “He has handed the baton to us and we dare not drop it,” Zille said.

Africa will be represented at the funeral by Nigeria’s Goodluck Jonathan and over a dozen other heads of state and government.

Talk show queen Oprah Winfrey and singer-activist Bono, as well as British billionaire Richard Branson and musician Peter Gabriel are also expected to be among the celebrity mourners.