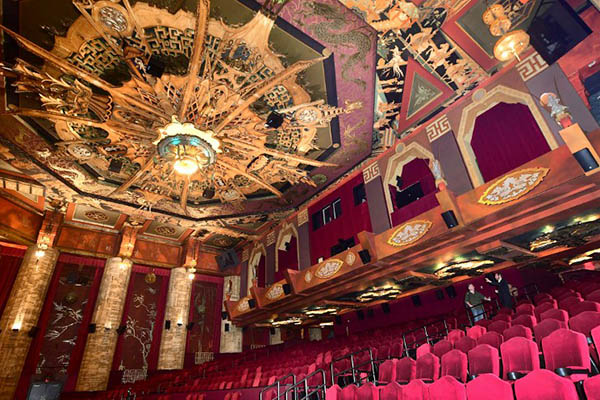 Shirley Temple did it barefoot. Mel Brooks wore an extra finger. Whoopi Goldberg buried her dreadlocks. Steve McQueen and actress wife Ali MacGraw did it facing the wrong way. An old aphorism says that to visit Los Angeles and not see the iconic hand and foot prints of Hollywood’s biggest stars in the imposing courtyard of the TCL Chinese Theater is like going to the Middle Kingdom and not walking The Great Wall.

On Thursday, the world’s most famous picture house celebrates 90 years at the epicenter of the movie business, the venue of many of Tinseltown’s most glamorous showbiz moments through 16 presidents, a world war and three huge earthquakes. The night before, veteran filmmaker Ridley Scott became the 304th star to sink his hands and feet into the cement squares in the theater’s forecourt—maintaining a tradition celebrated by Hollywood’s finest, from Mary Pickford through John Wayne and Sophia Loren to Jack Nicholson and Brad Pitt.

“It’s a real honor to get placed out in the forecourt and when you look at the people we have out there, going back now nine decades, it’s incredible,” Levi Tinker, resident historian at the Chinese, told AFP. “You have some of the biggest, brightest, most iconic names in Hollywood history.”

It all started when movie theater impresario Sid Grauman, one of Hollywood’s best known showmen, leased the former home of matinee idol Francis X. Bushman and opened the Chinese on May 18 in 1927 after raising $2 million.

Silent screen star Norma Talmadge clumsily stepped into wet cement on the construction site, witnessed by Grauman who—spying an opportunity—shrugged off her embarrassed apologies and said he would use the footprint to promote the opening.

Stars have since seen the ceremonies as a career highlight, often going to a great lengths to ensure their square stands out from the crowd.

Shirley Temple, the youngest honoree in 1935 at just six years old, appeared barefoot, quickly deciding it was a good way to distract the press from the fact that one of her baby teeth had just fallen out. Marilyn Monroe wanted to dot her ‘i’ with a diamond before being persuaded that the precious stone would probably be stolen. She sunk an earring into her square instead and the exposed half was stolen anyway.

More recently, Mel Brooks concealed until the last minute that one of his hands had a fake sixth finger. “You think after all this time there would be hardly any room. But there’s enough space out there to go on for a number of years still,” said Tinker, although he added that some big names were missing.

Audrey Hepburn was among the few to decline, while James Dean was readying to lay his prints in the presence of Giant co-stars Rock Hudson and Elizabeth Taylor when he was killed in a car crash at the age of 24.

Older than the Oscars or the Walk of Fame, the Chinese was Grauman’s third LA cinema after the lavish Egyptian a few blocks away and the downtown Million Dollar Theater. “He wanted to out-do what he had done in those other theaters and he had gone all throughout Europe and Asia looking at different architecture styles and he was very impressed with Chinese. He had a number of artifacts and antiques brought over,” said Tinker.

The entrepreneur imported temple bells, pagodas and other pieces while Chinese poet and filmmaker Moon Quon supervised artisans from his homeland as they created the many artworks that still decorate the auditorium.

On its opening night, tens of thousands lined Hollywood Boulevard as fans tried to catch a glimpse of their favorite stars at the packed 2,200-seat theater for the $11-a-ticket debut of Cecil B. DeMille’s The King of Kings.

Some five to six million visitors from across the world visit every year—as many as the Sistine Chapel in Rome—to see their favorite stars immortalized in the cement these days.

It is the only single-screen theater to have been open continuously for nine decades—not including short closures for renovations—and hosts between 35 and 50 premieres a year, more than any other venue in the world.

Next up for the iconic institution—which is owned by a board of private investors—is expansion, with a Chinese Theater due to open in San Diego later in the year, and then there are plans to open in the Middle East and China itself.

Alwyn Hight Kushner, who runs the Chinese, oversaw its transformation into the world’s largest IMAX theater in 2013, walking a tightrope between modernizing and preserving its historical features. “What’s so special is it’s constantly new history. We’re making history every single day,” she said.