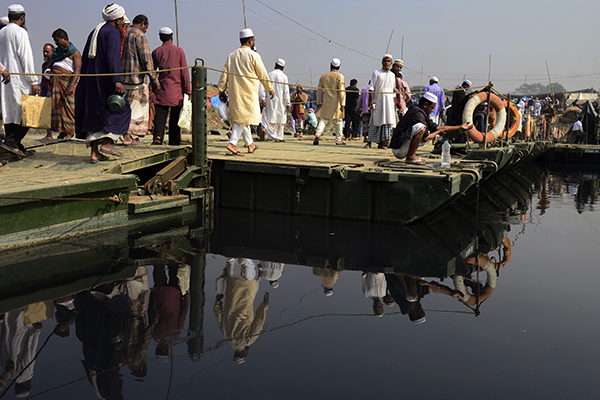 Over a million devotees are attending the World Muslim Congregation.

Vast crowds of Muslims prayed near the Bangladeshi capital as the second largest annual Islamic congregation after the Haj began Friday under tight security.

Over a million devotees flocked to the River Turag at Tongi, 40 kilometers north of Dhaka, as a scholar from Pakistan led the opening sermons of the Biswa Ijtema, or World Muslim Congregation. The devotees include 25,000 foreigners from 130 countries.

Officials said they had taken “foolproof” security measures with the deployment of 10,000 police and air and river patrols by the elite Rapid Action Battalion. “We don’t have any security threat, but we have taken enough security measures,” said police spokesman Shahidul Hoque.

This is the third year the festival is being held in two phases to accommodate an ever-growing number of devotees, said Nurul Islam, the district administrator who is also the coordinator of the festival. “We estimate there are already more than 1 million devotees. People are now gathering in every open space,” he said, adding the number of pilgrims would keep growing until final prayers on Sunday.

TV stations broadcast images of pilgrims on both banks of the river, and on bridges, roads, and rooftops around the venue, as the 165-acre main prayer ground had already filled to the brim.

During the three-day congregation, Muslims pray and listen to religious scholars. “We commit sins and mistakes in our daily lives, so I have come here to join the prayers with millions others to seek mercy from Almighty Allah,” said Muhammad Ismail.

Tablighi Jamaat, a nonpolitical organization which has tens of millions of followers across the globe, urges people to follow the tenets of Islam in their daily lives. Both Tablighi members and non-members attend the festival.

The government has arranged trains and ferries to transport pilgrims while Army engineers have set up dozens of makeshift bridges and water tanks to accommodate the huge crowd.

Bangladesh is the world’s third largest Muslim-majority nation, with Muslims making up nearly 90 percent of its 154-million-strong population.

The second phase of the festival, which also lasts three days, will begin Jan. 31.

I wish BD govt. and the people can make all he possible best arrangement for the visitors.
We appreciate whatever they are doing so far.

I don’t know if the govt. already does it or not but I think they should run extra trains/buses and ships to control the crowd and avoid unwanted accidents.