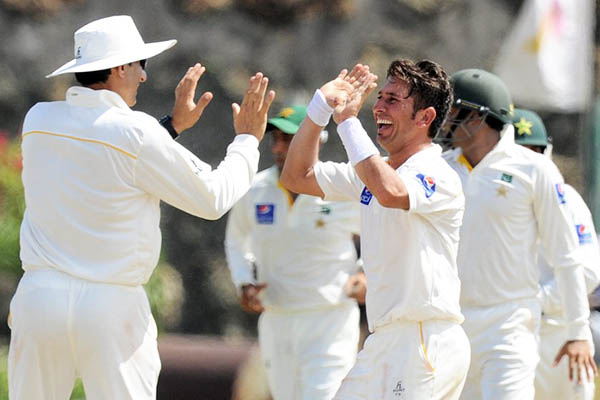 Sri Lanka captain hopes his team will recover from the loss and emerge victorious in remaining two matches of series.

Leg-spinner Yasir Shah claimed a career-best seven for 76 as Pakistan stunned Sri Lanka by 10 wickets in the first Test on Sunday to take the lead in the three-match series.

Shah spun a web around the Sri Lankan batsmen to skittle them for a paltry 206 in their second innings just before tea on the fifth and final day. Pakistan, set a victory target of 90, raced home in 11.2 overs with Mohammad Hafeez unbeaten on 46 and Ahmed Shehzad on 43 at the Galle International Stadium.

It was Pakistan’s first Test win in Sri Lanka since the eight-wicket triumph in Kandy in 2006. The second Test starts at the P. Sara Oval in Colombo on Thursday.

Pakistan’s remarkable recovery from 96-5 in the first innings came after the entire first day’s play had been washed out and just 64 overs were bowled on the second day. Opener Dimuth Karunaratne top-scored with 79, Lahiru Thirimanne made 44 and and Dinesh Chandimal was last man out for 38, but the rest of the batsmen folded against Pakistan’s incisive bowling.

The 29-year-old Shah, later named man of the match, ripped through the batting as Sri Lanka lost their last five wickets for 39 runs after being 167 for five at one stage.

Sri Lanka took their overnight score of 63-2 to 144-4 by lunch, before a further six wickets fell on a dramatic afternoon in front of some 1,000 home fans.

Pakistan captain Misbah-ul-Haq, who had gambled by electing to field first after winning the toss, was jubilant by what he described as a “big win.”

“It was very clear in our minds that the only one way to win this Test was if we got them out early in the first innings,” the 41-year-old said. “We took our chance and it worked. There was a bit of moisture, which helped our spinners, because the ball turned and bounced. Hats off to everyone. It began with the fightback by Asad Shafiq and Sarfraz Ahmed from 96-5. This really is a big win for us and boosts our confidence for the remaining matches.”

A disappointed Sri Lankan captain Angelo Mathews hoped his team would recover from the defeat. “This was a pretty bad loss for us, but the Pakistanis deserved to win,” he said. “The idea was to bat through the day, but we kept losing wickets. We have two more games to bounce back and don’t need to panic. It was just a one-off game. We have got to keep trust in the players we have got.”

The hosts lost nightwatchman Dilruwan Perera off the first ball of the day, clean-bowled by Shah, but the left-handed pair of Karunaratne and Thirimanne put on 69 runs for the fourth wicket.

With the hosts just 15 runs ahead, left-arm seamer Wahab Riaz had Thirimanne caught low at first slip by Younis Khan to keep the interest alive during the lunch break.

Sri Lanka suffered a massive blow off the second ball after resumption when Mathews was controversially given out caught at short leg by TV umpire Chris Gaffaney. The New Zealander upheld on-field umpire Richard Illingworth, who had ruled that the batsman was caught at short-leg off Shah even though replays proved inconclusive on whether the ball had come off the bat.

Mathews, who had called for a review as soon as the umpire raised his finger, was visibly furious as he returned to the pavilion. Neither hot-spot or snickometer technology is part of the Decision Review System for the series.

Karunaratne’s patience after a vigil of more than four hours at the crease ran out when he attempted a big hit off Shah, missed the line and was smartly stumped by an agile Sarfraz Ahmed.