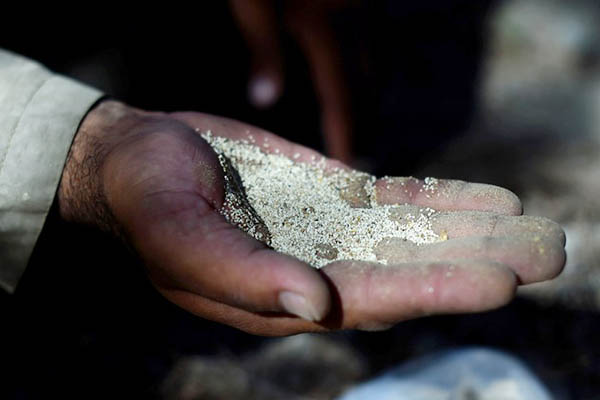 With jingling poppy seeds hidden in his pouch, Helmand farmer Nematullah sidled out of Taliban territory to explain how he struck gold—two additional opium harvests a year, which could further roil Afghanistan’s conflict.

Afghanistan has all the trappings of a narco-state, with opium production—the lifeblood of the Taliban insurgency—from the traditional spring harvest alone edging toward a record high. Farmers such as Nematullah are now reaping two more crops—in midsummer and autumn—in parts of the volatile south, with experts citing genetically modified seeds and bold farming experiments as irrigation techniques improve and eradication efforts collapse.

“We used to have one annual poppy harvest—we now have three,” said Nematullah, a young farmer from the insurgency-wracked district of Kajaki in northern Helmand. “Helmand has a lot of war, a lot of land, and very little employment except fighting for the Taliban. Poppies are a blessing—it now gives us work throughout the year.”

Nematullah snuck out of his village, a Taliban hotbed, to meet AFP in the provincial capital Lashkar Gah, bringing with him a handful of ivory-colored poppy seeds that he claimed grow well in the two new seasons. Sourced from local traders, those seeds shorten the growth cycle of the plant to around 70 days compared to the usual five to six months, with largely the same quality of opium resin, multiple farmers told AFP.

“Some parts of Helmand plant twice a year, because of the favorable climate, but three poppy seasons would be thanks to genetically modified seeds,” said Jelena Bjelica, a researcher with the Afghanistan Analysts Network. “The seeds are believed to originate in China where legal opium cultivation is undertaken for pharmaceutical use,” Bjelica told AFP, adding it was unclear who was behind their distribution in Afghanistan.

Pink-and-white poppy blooms, which in some areas grow within eyeshot of government buildings, help bankroll the Taliban’s nationwide insurgency and present an existential threat to the Afghan state. The Taliban, widely likened to a drug cartel, earn up to $1.2 billion annually from taxing poppy farmers alone, Western officials say.

The new crops could further swell insurgent coffers, underscoring the stunning failure of the multi-billion-dollar U.S. war on drugs in Afghanistan as it pursued a war on terror there. It could enhance not just their financial muscle to recruit more fighters but also sway corrupt Afghan forces.

“Imagine if our soldiers get 10,000 Pakistani rupees to defend government checkpoints, our enemy has the capacity to pay Rs. 50,000 to abandon the same checkpoints,” a senior Helmand security official told AFP, referring to the new crops. “It’s a very worrying situation.”

Opium remains an economic linchpin for many farmers, who apparently have a strong preference for cultivation in areas under Taliban control. The U.N. says the insurgents act “more like ‘godfathers’ than a ‘government in waiting’.”

The new poppy crops are reported in northern Helmand districts known for cooler summers such as Nawzad, Musa Qala, Sangin and Kajaki—almost entirely under Taliban control—as well as some restive areas of neighboring Kandahar, Uruzgan and Zabul provinces.

“Diversification and experimentation by farmers includes the move to three opium poppy crops per year,” said David Mansfield, author of A State Built on Sand: How opium undermined Afghanistan. “Cheaper technology is a dominating factor that has allowed these advancements.”

The second and third crops require almost daily irrigation, and farmers were benefiting with improved access to water pumps and even solar-powered tube wells, Mansfield said. But the yields are limited as the crop matures quickly. Mansfield estimates that cultivation of the second crop is likely to be under 10,000 hectares, while not much is known about the third.

Farmers interviewed by AFP voiced confidence about greater yields over the coming years, with many emboldened to experiment further following a cessation of the government’s costly eradication drive.

“It caused a sensation,” said Mohammad Qasim, an opium farmer from Helmand’s Marjah district. “People talked about it as if they had unearthed a gold mine: ‘Poppy grows in the off season too’.”

As word spread, farmers made similar experiments in Marjah, but those failed in the swelteringly hot climate. But that only prompted Qasim’s family to lease opium farms in Shah Wali Kot and Kajaki for off-season farming.

As multiple harvests become the new normal, he said, poppy farmers are less inclined to do what was deemed necessary when the eradication risk was high: dedicating a part of their farmlands to less profitable cash crops for the sake of food security. “Opium is money,” Qasim said. “Why should we waste time growing wheat?”