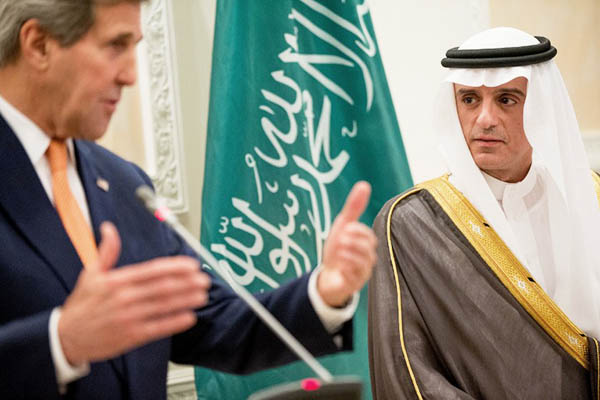 Saudi Arabia’s foreign minister said Friday that a humanitarian ceasefire in the Yemen conflict would start on Tuesday, although he stressed its success depended entirely on the Iran-backed Shia Houthi rebels.

“We have made a decision that the ceasefire will begin this Tuesday, May 12, at 11:00 p.m. and will last for five days subject to renewal if it works out,” Adel al-Jubeir said at a meeting of Gulf ministers in Paris.

Speaking at a press conference alongside U.S. Secretary of State John Kerry, al-Jubeir said the success of the ceasefire hinged on the Houthis and their allies. “The ceasefire will end should Houthis or their allies not live up to the agreement—this is a chance for the Houthis to show that they care about their people and they care about the Yemen people,” al-Jubeir added.

Saudi Arabia, which has led six weeks of airstrikes on Yemen in support of exiled President Abedrabbo Mansour Hadi, warned Thursday that Houthi rebels had crossed a “red line” by shelling populated border areas in the kingdom.

Kerry said the ceasefire would take place “provided that the Houthi agree that there will be no bombing, no shooting, no movement of their troops or maneuvering to reposition for military advantage [and] no movement of heavy weapons.” He added: “The ceasefire is conditional on the Houthis agreeing to live by these commitments.”

There were indications that the Houthis would agree to the ceasefire, he said, explaining that the date was chosen to give the Houthis time to give orders to their fighters in the field. “It is not hard if you pass the word and give strict orders to your people,” Kerry said. “Our hope is that the Houthis will spread the word rapidly.” He stressed that the pause in hostilities was a “renewable commitment” that, if it held, “opens the door to possibility of an extension.”

“This is an important moment,” he said, and anyone who cares about Yemen “should take clear notice of the fact that a humanitarian catastrophe is building,” with signs the country was running out of food, medicine and fuel.

Without mentioning them by name, Kerry also urged the countries “that have the greatest influence” on the Yemenis—meaning Iran and Russia—“to encourage them to take advantage of this moment.”

“We believe that all those who have been supportive of the Houthi need at this time to encourage the leadership and all the way down the rank and file to live by this opportunity which is a very important one.”