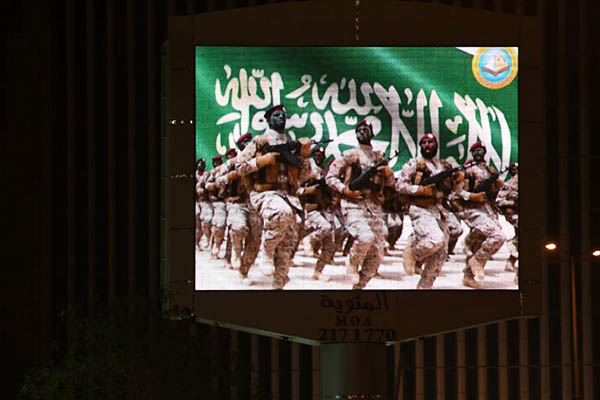 Over 90 percent of the Gulf kingdom’s residents support the ongoing conflict, according to former head of religious police.

This is wartime in Saudi Arabia, a tightly controlled Islamic kingdom where almost every audible voice is behind the three-week-old air campaign against Shia rebels in neighboring Yemen. “Our king has done something good,” said Saud Mubarak, an unemployed man in his mid-20s.

He echoed the government view of the absolute monarchy that the Saudi-led military coalition acted to stop the Houthi rebels’ advance and to help the legitimate government of President Abedrabbo Mansour Hadi. “We’re all happy about that,” said Mubarak, a former security guard.

Sheikh Ahmed al-Ghamdi, former head of the religious police in the holy city of Mecca, said “over 90 percent” of people in the kingdom support the operation in Yemen, which has been dubbed “Decisive Storm.”

“I feel that what the kingdom of Saudi Arabia did was 100 percent right… not only for Yemen but all the countries of the Gulf, and Arabs and Islam,” said Ghamdi, who sparked controversy in the conservative kingdom last year when he appeared in a video with his wife whose face was uncovered. On Yemen, his views follow the official line, which accuses Iran of supporting the Houthis, despite Tehran’s denial of supplying weapons.

The rebels swept into the capital Sanaa last September from their highland stronghold and then advanced south on the port city of Aden, forcing Hadi to flee to Riyadh. The coalition began its campaign after Saudi Arabia feared the Houthis, allied with army units loyal to former president Ali Abdullah Saleh, would take over all of Yemen and move it into the orbit of Shia Iran, Sunni Saudi Arabia’s regional rival.

Ghamdi said Iran is untrustworthy “like a fox” and is the “enemy for Muslims and the Arabs.”

The coalition says it has killed hundreds of Houthis. Six Saudi armed forces personnel have died and others have been wounded in skirmishes along the frontier with Yemen.

Journalists have been given escorted visits to troops reinforcing the border. But from the front there have been no bloody combat pictures that might shake the nation’s morale. In the capital Riyadh, large video screens in shopping malls and on street corners mix advertising images with shots of marching troops and King Salman saluting beside a warplane.

Hints at the human cost of war have nonetheless made it into the country’s newspapers. The state news agency issued a photo of the king’s son, Defense Minister Prince Mohammed bin Salman, visiting a wounded soldier in hospital. He leaned over and clasped a hand of the serviceman, whose face was not shown and whose wounds were not described.

Saudi Arabia ranks 164 out of 180 countries and territories in the Reporters Without Borders annual index of press freedom, a situation which has left Saudis one of the world’s most active users of social media where they have more leeway to comment. But even there, voices critical of the war have been rare.

“Yes to the #Decisive_Storm. Yemen needs the help, needs the support from its neighbors. Yemen is moving to the safe and right way,” is a typical post. “There’s no freedom of speech here in Saudi Arabia,” said a resident of the country’s Eastern Province where most of the kingdom’s Shia minority lives. “If you speak against this operation it means your loyalty is to Iran.”

Early in the campaign some people in the Shia-majority city of Qatif wanted to protest against the airstrikes and “support Yemeni people” but security officers ordered them by loudspeaker to stay in their homes, said the resident, asking to remain anonymous.

Some Sunnis are also against the war but there is not a lot of opposition, the resident said, because even Saudis who would normally be critical of the government have bought into a “sectarian” narrative—that the fight is between Sunni and Shia and not about Saudi’s regional influence—promoted in the local media since the start of the campaign.

“Actually I don’t care what happens to Iran. It’s not my country,” the eastern resident added, expressing sympathy for both Saudi troops as well as the people of Yemen. “Our country will pay a lot of money for this war, and they will lose soldiers.”