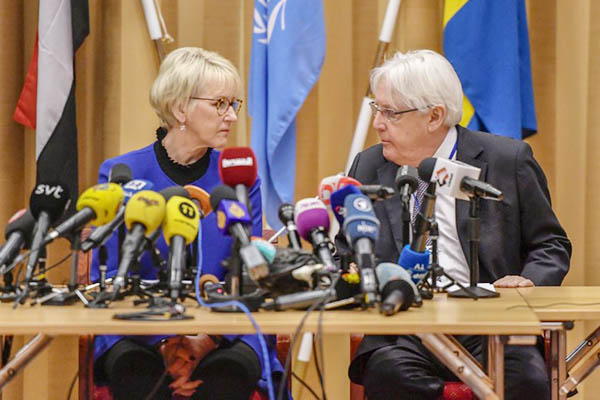 Yemen’s government and rebels, locked in a devastating war, traded accusations on Thursday as they sat down for hard-won talks the United Nations described as “difficult” but “critical.”

The talks in Sweden are the first in two years, in a conflict between a pro-government military coalition, led by Saudi Arabia, and Iran-backed Houthi insurgents that has pushed impoverished Yemen to the brink of mass starvation.

While the days leading up to the gathering saw the government and rebels agreeing on a prisoner swap deal and the evacuation of wounded insurgents for medical treatment in Oman, both parties dug in on their demands as the talks began.

U.N. Secretary-General Antonio Guterres on Thursday urged the warring parties not to impose pre-conditions after both sides put forward demands, while the rebels said they were still assessing the “seriousness” of the hard-won talks. “We will judge whether the Stockholm talks are serious or not tomorrow,” Houthi spokesman Mohammed Abdelsalam told the Arabic-language Al-Mayadeen television channel on Thursday night.

The talks, in the picturesque Swedish village of Rimbo north of Stockholm, where the two sides have to eat in the same cafeteria, are slated to run for one week.

The U.N. special envoy for Yemen, Martin Griffiths, said the talks presented a “critical opportunity” but did not amount to negotiations on a full end to the conflict between the Iran-backed Houthi rebels and the rival government alliance led by Saudi Arabia.

Speaking on condition of anonymity, one U.N. official said the talks marked “the beginning of difficult work.”

On the table at the Sweden talks is the fate of Hodeida, the last rebel stronghold on Yemen’s Red Sea coast and the conduit for 90 percent of vital food imports. The Saudi-led military coalition, which includes troops trained by the U.S. and U.A.E., has for months led an offensive to retake Hodeida.

The battle has sparked fears for more than 150,000 civilians trapped in the city. Saudi Arabia and its allies accuse the rebels of smuggling arms from Iran through Hodeida, a charge Tehran denies. “We’d like to take Hodeida out of the conflict because… it’s the humanitarian pipeline to the rest of the country,” said U.N. envoy Griffiths.

Yemeni Foreign Minister Khaled al-Yamani, who heads the Saudi-backed government’s delegation to the U.N.-sponsored talks, said his team would deliver on a planned prisoner swap with the Houthi rebels. But he refused to compromise on Hodeida, home to Yemen’s most valuable port. “The Houthi militias must withdraw from the city of Hodeida and its port and hand it over to the legitimate government, and specifically internal security forces,” Yamani said.

Hamid Issam, a member of the team of Iran-backed Houthi rebels in Sweden, dismissed Yamani’s role in the talks altogether. “We came here with the intention that these talks would succeed,” said Issam. “But it is not up to Khaled al-Yamani… It is up to Saudi Arabia, the United Arab Emirates and the United States. If they could have taken Hodeida four years ago, they would have. They have not been able to take it, and they will not be able to take it as long as the people of Yemen are fighting.”

More than three years since Saudi Arabia and its allies joined President Abedrabbo Mansour Hadi’s fight against the Houthis, Yemen is now home to what the U.N. calls the world’s worst humanitarian crisis. Fourteen million people face starvation, according to the U.N. And as the talks started, a World Food Program official warned even halting the war would not end hunger in Yemen.

The head of the Houthis’ political council, Mohammed Ali Houthi, threatened on Thursday to bar U.N. planes from using the Yemeni capital’s airport and keep it closed unless the talks led to its full reopening.

Sanaa international airport, in the rebel-held capital, has been largely shut down for years. It has been the target of air raids by the Saudi-led coalition, which also controls Yemeni airspace. “We would like to see that airport open, but it needs to be assessed,” Griffiths said. “We’d like to see progress on this.”

International pressure to end the conflict has been ratcheted up in recent weeks, after the murder of Saudi journalist Jamal Khashoggi focused attention on Saudi Arabia’s foreign policy. Griffiths’ plans to host talks in Geneva in September collapsed on the opening day after the rebels refused to leave the Yemeni capital in case they were not allowed to return.