Home Culture You Are What You Buy

You Are What You Buy 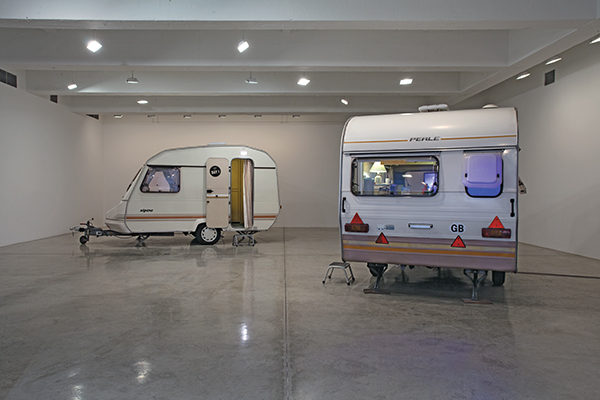 [dropcap]T[/dropcap]he only problem with the latest installation by Berlin-based artist Phil Collins is that it doesn’t come with an amazing Ginsu knife; it hasn’t got any “buy two, get one free” deals; you don’t get a bonus zirconium ring, even if you call before 9 o’clock. Other than that, Collins’s take on home-shopping TV, recently unveiled at the Tanya Bonakdar Gallery in New York, is as gripping and strange as anything on offer in this autumn’s new season of art.

This Unfortunate Thing Between Us, consists of two camping trailers—what Collins and his fellow Brits call caravans—rolled into the gallery and kitted out with all the pleasures of an English vacation. They come with a supply of “crisps,” lime cordial, and, most especially, a flatscreen TV to while away rainy days by the British seaside. Gallery-goers are invited to curl up and watch the custom programming Collins has prepared.

Over two nights in 2011, on primetime in Germany, he broadcast TUTBU TV, a custom-made shopping channel that had all the trappings of a normal one—fast-talking host, slim spokesmodel, a bank of telephone operators—except that what it sold was utterly original. As our sleek host puts it in the subtitled video of the broadcast screening in the caravans, “With the endless electric blankets, gardening tools, upholstery cleaners, and fake jewelry, one need of customers has sunk into the background: the need for experiences.”

Collins’s other caravan presents the next day’s broadcast, during which three regular Germans, chosen by Collins from among the hundreds who’ve called in, take their place in the same three fantasies. Gerd Radeke, a middle-aged man from Bremen, gets a grilling from the Stasi about his first love affairs and almost breaks down. A bearded youth from Berlin (“I’ve always wanted to know how people had sex in earlier times”) chooses to play the part of a bewigged Jane Austen maid who pleasures her mistress while a strapping stable boy and a redcoat have sex nearby. An elderly Berliner named Klaus Funke tells his assembled family—most are actors, but a few are clearly relatives, weeping real tears—what jerks they have been.

One of the standard lines about art is that it’s less about the objects artists make than the experiences those objects provide and what they mean to their viewers. Collins seems to have taken that cliché at face value. His latest artwork seems like pure experience, divorced from consumable aesthetic goods. It’s also guaranteed to mean something to its viewers—in this case, those who’ve bought said experiences and the wider audience witnessing them. But offering up experiences rather than objects doesn’t pull art out of the world of consumption, and I think that’s part of Collins’s point. As our smarmy host peddles his goods, we have to figure that he’s supposed to stand for an artist—even for Collins himself. And there’s no doubt we’re in the presence of art, rather than of straight commerce or entertainment, because Collins inserts so much artsy weirdness into the broadcast: fright wigs, goth makeup, other avant-garde details worthy of Mike Myers’s “Sprockets” routines. “Let’s find out together what teleshopping can do,” is TUTBU’s tagline, as though it’s exploring a new art medium, the way abstract painters were once told to explore the limits of acrylics.

So even as we art-world sophisticates enjoy the wit and circularity involved in Collins’s gallery installation, we are forced to recognize that we are no better than, or much different from, a couch potato in a cheap trailer, teleshopping for a garden hose.